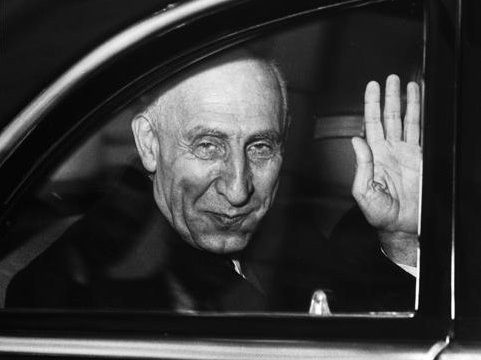 Atlantic Council | PAUL R. PILLAR: The Trump administration’s policy toward Iran aims for regime change. Possibly US President Donald Trump dreams of reaching some bold deal with the current leadership of Iran, but he has not laid out any feasible route to one. The administration’s dominant hope instead seems to be that stepped-up economic pressure will somehow lead disaffected Iranians to rise up against their rulers. Secretary of State Mike Pompeo’s most recent speech on Iran was essentially a call to do just that.

Earlier this year, Pompeo enumerated a list of demands on Iran so sweeping that they seem designed—like the demands that Austria-Hungary placed on Serbia in 1914—to be rejected. Sixty-five years ago this month occurred the one instance in which the United States was involved in a change of regime in Iran: the ouster in August 1953 of Prime Minister Mohammad Mossadegh.

Some lessons from that experience are germane to the pursuit of regime change in Iran today, regarding whether Washington can instigate a change of regime in Tehran and, if it does, whether this would be good for US interests.

On the first question, major differences divide what intelligence officer Kermit Roosevelt and his fellow plotters accomplished in 1953 from the objective the Trump administration has set out for itself. One difference involves external support. The main precipitant of action against Mossadegh was his government’s nationalization of the Anglo-Iranian Oil Company, today known as British Petroleum, or BP. British interests were more directly involved than US ones, and the United Kingdom had at least as much to do with the intervention as the United States did.

By contrast, the United States under the Trump administration is isolated when it comes to policy on Iran. Apart from the regimes in Saudi Arabia, the UAE, and Israel, there is little international support for the administration’s intensified economic warfare against Iran, and much resentment over the economic damage that secondary sanctions are inflicting on others.

An even more important difference is internal support, and especially the position of the military. In 1953, the Iranian military played a key role in restoring the shah to power, and a general became prime minister in place of Mossadegh. Today in Iran it’s inconceivable that the most politically and economically relevant arm of the military—the powerful Islamic Revolutionary Guard Corps—would further any change of regime in a direction that the United States might want. To the contrary, the leadership of the IRGC sees itself as the foremost guardian of the Islamic revolution.

The target of the 1953 coup was narrow and, as such, vulnerable. The target was essentially one man, Mossadegh. Although the prime minister had developed considerable popularity as an elected leader—amid the highly fluid Iranian politics of the early 1950s—much of his support was brittle and unreliable. Mossadegh offended some would-be allies with his authoritarian ways. Toppling him was far more achievable than today’s objective of overthrowing the entire Iranian political system.

Because the objective in 1953 was the deposition of one prime minister rather than systemic change, alternative leadership was readily available in the person of Shah Mohammad Reza Pahlavi. He had been the monarch since replacing his father in 1941, and he had never relinquished the throne, though he briefly left the country when the turbulent events of August 1953 initially didn’t seem to be going his way. Although the political change in 1953 is commonly labeled as a coup d’état, it could also be described as a reallocation of powers between the monarchy and the elected part of the regime.

In contrast, would-be regime-changers of today have no viable alternative to the current power structure to offer. The bankruptcy of the Trump administration’s thinking in this regard is indicated by its apparent looking to the Mujahedin-e Khalq (MEK), a cult and terrorist group that lost whatever support it once had in Iran when it threw in its lot with Saddam Hussein during the eight-year Iran-Iraq War.

The events of 1953 suggest other ways in which even if regime change were to occur today in Iran—leaving the loathsome MEK out of the picture—such upheaval probably would not be beneficial to US interests. The shah proved to be a weak reed on which to lean, as multiple US administrations did over the next twenty-five years, for stability in the Persian Gulf region. Mohammad Reza Shah engendered hatred among his own people with the harsh aspects of his autocratic rule, while he also made bad strategic decisions and was weak-willed in the crunch. Past US support for the shah remains in Iran today a source of resentment against the United States.

US involvement in the events of 1953 remains a more specific and frequently cited source of resentment. Regardless of how much memory there may or may not be of Mossadegh and his policies, for most Iranians the main takeaway from 1953 is that the United States interfered in the internal affairs of their country, not to help that country’s people, but instead for Washington’s own political and economic purposes.

Many revolutions, like the major ones of the past in France and Russia, pass from a more promising to a more fearsome stage. In Iran it may take longer for a second shoe to drop, but drop it does. The replacement of Mossadegh’s leftist nationalism with the shah’s autocracy can be interpreted as the first stage of a two-stage political transition that Ayatollah Ruhollah Khomeini completed in 1979—and the results of that second stage have now remained in place longer than the shah did.

It’s impossible to say what directions Iran would have taken if Britain and the United States had not pushed out Mossadegh. But it’s a safe bet that, with the Cold War having come and gone, we wouldn’t be talking today about what was the main worry in 1953: a communist Iran.

Paul R. Pillar is a nonresident senior fellow with the Center for Security Studies at Georgetown University. He retired in 2005 from a twenty-eight-year career in the US intelligence community. His senior positions included national intelligence officer for the Near East and South Asia, deputy chief of the DCI Counterterrorist Center, and executive assistant to the director of Central Intelligence. His books include Negotiating Peace, Terrorism and US Foreign Policy, Intelligence and US Foreign Policy, and Why America Misunderstands the World.