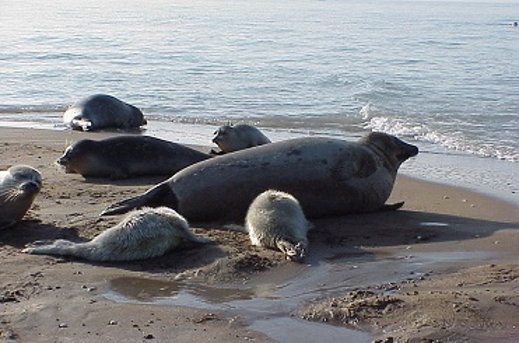 Tehran Times – Given Caspian seals, the sole marine mammals inhabiting the Caspian Sea, have fallen into a drastic decline pushing the specie towards extinction, Iranian ships in the Caspian Sea will display Caspian seal image, deputy environment chief for marine affairs has said.

By doing so, Iran spread the message of “the need for preserving the Caspian seal” to the world, ISNA quoted Parvin Farshchi as saying on Saturday.

Due to the importance of preserving the precious species, and the sympathy and cooperation between the maritime organizations, the project has been jointly implemented by the Islamic Republic of Iran Shipping Lines Company and the Department of Environment, she said.

Pointing to the precious animal being in serious danger of extinction, she noted that the Caspian seal population which stood at about one million in the 90s, wouldn’t have decline, if serious measures have been taken to preserve them.

“Neither Iran not any other littoral countries were or are authorized to fish Caspian seal.”

In an exclusive interview with the Tehran Times in November 2017, Farshchi said that poaching activities in other Caspian Sea littoral countries and also bycatch in Iran are of the threats pushing the precious animals towards extinction with 90 percent decline in the population density.

Referring to the Convention on the Conservation of Migratory Species of Wild Animals (CMS), she said that Caspian seals were included on Appendices I and II of the Convention by Iranian Department of Environment (DOE) efforts.

As per the Appendix I of the Convention, poaching and illegal fishing activities is banned to save the animals from extinction, while Iran has not had a share in illegal fishing of the species since the very beginning, she concluded.

Over the 12th Meeting of the Conference of the Parties (CMS COP12) to the Convention on the Conservation of Migratory Species of Wild Animals (CMS), administered by UN Environment on October 28, 2017, Caspian seals were included on Appendices I and II of the Convention.

According to the Conservation of Migratory Species of Wild Animals Website, Appendix I comprises migratory species that have been assessed as being in danger of extinction throughout all or a significant portion of their range.