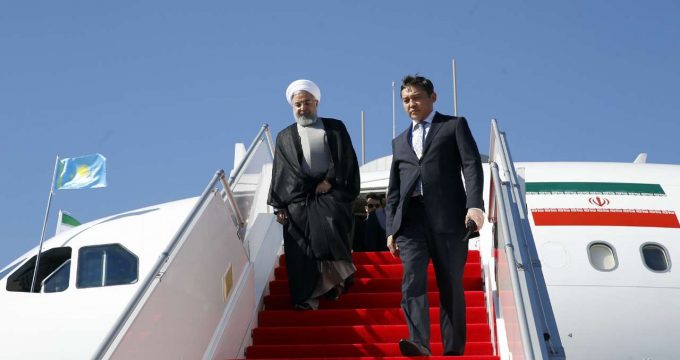 IRNA – Iranian President Hassan Rouhani arrived in Aktau, Kazakhstan, on Sunday to participate in the Caspian Sea littoral states summit slated to be held within hours.

Upon his arrival at Aktau airport, President Rouhani was welcomed by senior Kazakh officials.

His is supposed to elaborate on Iran positions and views regarding the Caspian Sea Legal Regime.

Signing a joint statement and also some important and strategic documents on Caspian Sea by leaders of its five littoral states and holding separate bilateral meetings with Kazakh President Nursultan Nazarbayev and a number of his other counterparts are among President Rouhani’s itinerary.

The Caspian Sea littoral states ministerial meeting was held on August 11 with the participation of foreign ministers of its consisting countries (Iran, Russia, Turkmenistan, Azerbaijan and Kazakhstan).

The previous meeting of the foreign ministers was held on December 4-5, 2017, in Moscow.