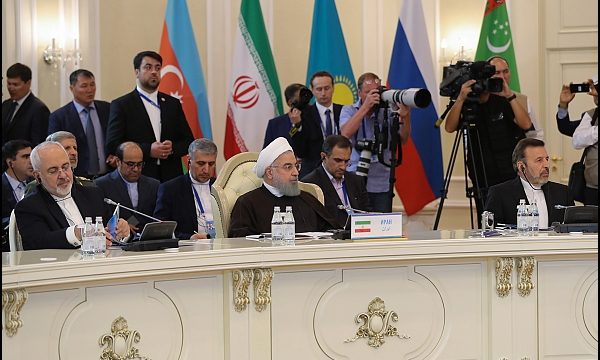 MNA – Iranian Foreign Minister Zarif says the five Caspian Sea littoral states have agreed to continue friendly dialog on unresolved issues after they signed the Convention on the legal status of the resource-rich Caspian Sea.

The heads of states of Iran, Azerbaijan, Kazakhstan, Russia, and Turkmenistan signed the Convention on the legal status of the resource-rich Caspian Sea, a matter disputed between the five neighbors for more than 20 years.

In a tweet on Sunday, Iranian Foreign Minister Mohammad Javad Zarif, who accompanied President Rouhani at the Caspian Sea summit, hailed the event as a “day of solidarity of Caspian Littoral States”, which included “codifying cooperation on environment, shipping, fisheries, sustainable development and security without foreign military presence.”

The five nations also agreed to “continue friendly dialog on unresolved issues of delimitation and shares of sea and its resources,” Zarif added.