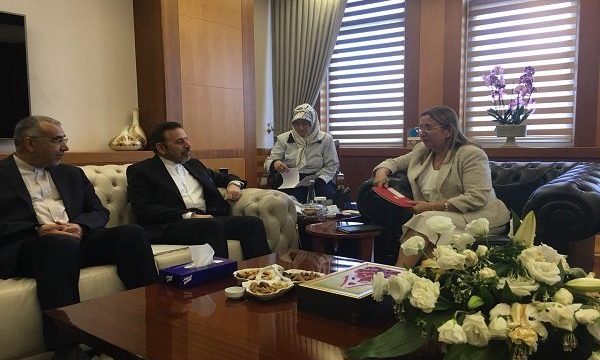 MNA – In a meeting with Chief of Staff of Iran’s president, Turkey’s Trade Minister Ruhsar Pekcan said that Turkish companies are interested in trade and investment in Iran.

Mahmoud Vaezi, the Chief of Staff of Iranian President Hassan Rouhani, arrived in Ankara on Thursday for a one-day visit to deliver President Rouhani’s message to his Turkish counterpart Recep Tayyip Erdoğan.

In addition to meeting with the Turkish president and foreign minister so far, Vaezi has met with the Turkey’s Trade Minister Ruhsar Pekcan.

Referring to Iran and Turkey’s willingness to expand bilateral economic and trade relations, the Chief of Staff of Iran’s president in the meeting with Ruhsar Pekcan hailed the role of the two countries’ private sectors in expanding bilateral relations, calling on them to intensify their efforts.

He added that Iran is ready to provide the necessary facilities for the development of cooperation between the two countries.

He urged the Turkish authorities to introduce the new head of Iran-Turkey joint economic commission in a bid to expand bilateral cooperation.

The Turkish trade minister, for her part, emphasized the importance of expanding relations between the two countries’ private sectors, saying “the Turkish companies are interested in trade and investment in Iran, and I know that some of them have currently invested $ 2 billion in Iran. They are ready to significantly increase their investment in Iran if investment barriers are eliminated and more facilities are provided to them.”

Ruhsar Pekcan noted that the two countries need to intensify their efforts to increase the volume of bilateral to the $ 30 billion target which is set by two presidents.