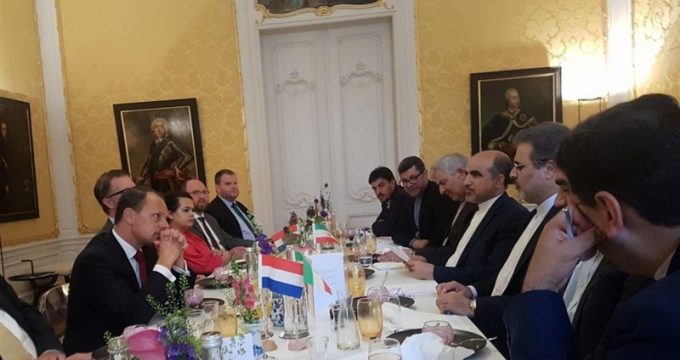 Tasnim – High-ranking diplomats from Iran and the Netherlands held the fourth round of consular meetings in a bid to boost bilateral relations between the two countries in diverse spheres.

During the meeting in The Hague, Iran’s Ambassador to the Netherlands Alireza Jahangiri and the newly appointed Dutch ambassador to Iran hailed the growing cooperation between the two countries in the consular area.

They also stressed the need to implement agreements reached in previous consular meetings and boost cooperation to deepen interaction between the two countries’ peoples.

The Iranian and Dutch diplomats also agreed to increase consular, immigration, and judiciary cooperation, to facilitate visa regime for businessmen, investors, and elites, to fight against illicit drug trafficking, and to inform the other side on the conditions of the two countries’ expatriates.

The two sides further agreed to follow up on the implementation of the agreements reached during the session and to hold the next round of the meeting in Tehran to finalize documents of the agreements.

Back in February, the foreign minister of the Netherlands, Sigrid Kaag, traveled to Tehran for talks with high-ranking Iranian officials on bilateral, regional and international issues.

During her meeting with Iranian Foreign Minister Mohammad Javad Zarif, she emphasized that the Netherlands backs the 2015 nuclear deal between Tehran and six world powers, known as the Joint Comprehensive Plan of Action (JCPOA), and its implementation.

She also highlighted the EU’s commitment to implementing the JCPOA during a meeting at the time with Iranian President Hassan Rouhani, calling for continued negotiations with Iran as part of a trust-building process for cooperation on issues of mutual interest.

Iran has recently enhanced political contacts with foreign countries in a bid to save the 2015 nuclear deal after the US exit.