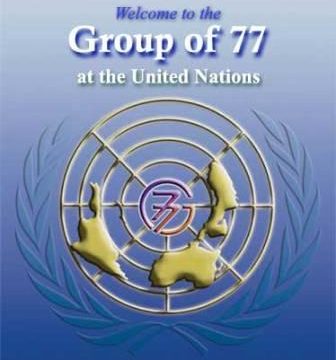 IRNA – President of the Group of 77 stressed in a meeting in Vienna that all sides of the July 2015 nuclear agreement- the Iran Deal- should fully implement the international accord.

At the meeting, Jativa stressed the importance of following ‘multilateralism’ in the international arenas and countering ‘unilateralism.’

The US President Donald Trump announced his decision about the Iran Deal on May 8 and unilateral withdrawal of his country from the international agreement. Many world powers, including Russia, China, and the European Union have expressed disagreement on Trump’s decision.

Jativa, who is also Ecuadorian Permanent Representative to Organization of American States (OAS), appreciated Iran’s important role in the Group of 77.

G77, consisting of Seventy-Seven Developing Countries, was established in 1964 with the purpose of preparing the ground for cooperation, promoting economic interests and fostering the negotiating capacities for international economic issues in the UN.

For his part, the Iranian ambassador in the meeting expressed Tehran’s readiness to boost cooperation with the G77 in line with the Group’s goals.

Gharib Abadi further called on the G77 to direct the international organizations, particularly the IAEA to the true activities in line with serving the interests of the Seventy-Seven Developing Countries and creating the balance in the organizations’ decisions.

Talking of the latest situation of the JCPOA after the US May exit, the Iranian diplomat said the United States by withdrawing from the international agreements, including the Iran Deal, is after imposing unilateralism and fighting multilateralism.

However, Washington is fortunately alone following its policy [of unilateralism] as the international community along with Iran has presented challenge to the US unilateral actions, Gharib Abadi said.

On June 20, Gharib Abadi was appointed as successor to Reza Najafi.