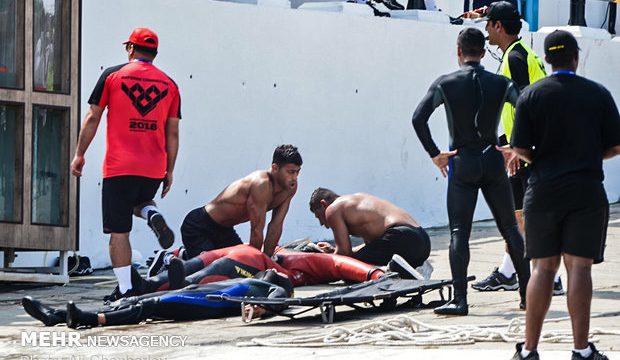 MNA – The Iranian Navy’s lifesaving team has won in the sunken ship contest in the International Army Games 2018 in Iranian city of Nowshahr.

According to the Public Relations Department of the Iranian Army, the lifesaving team of Iranian Army’s Navy displayed their great skills and came first in the Sunken Ship contest as part of the International Army Games 2018.

The Iranian Navy’s life guarding team, which over the past few days have broken the various previous records obtained during the past four edition of the International Army Games in different contests, won once again in rescuing the crews of a sunken ship as part of the Sunken Ship contest 30 minutes clear ahead of other teams participating in the tournament.

It was the first time that the International Army Games included the Sunken Ship contest.

More than 100 contenders participated in the contest which was hosted by Iranian Army’s Navy in the city of Nowshahr on the southern coast of the Caspian Sea in Mazandaran Province.

The Games, running through July 29 to August 11, has been initiated by the Russian Ministry of Defense, and is co-organized this year by China, Russia, Belarus, Azerbaijan, Kazakhstan, Armenia and Iran.