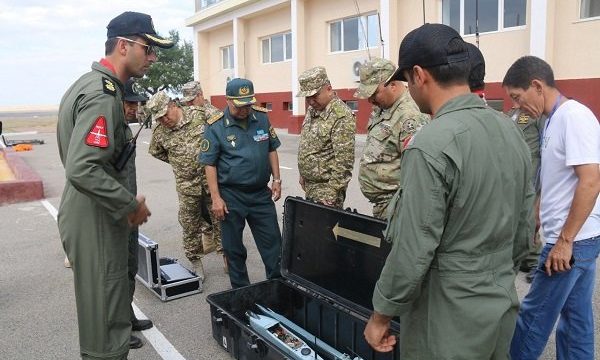 MNA – Kazakh Minister of Defense Saken Zhasuzakov met on Saturday with the Iranian team which is participating in drone contest of Army Games 2018 in Kazakhstan.

Meeting with the Iranian team and visiting their equipment, Zhasuzakov wished success for Iran’s representatives in the event.

The drones’ team of the Air Force of the Army of the Islamic Republic of Iran competes with representatives of Russia, Belarus, Kazakhstan, China and Pakistan in the field of hand-launched remote-controlled unmanned aerial vehicle.

Two stages of drone contest have been already held, where the Iranian squad, comprising of nine participants and seven drones, have so far showed great performance and are among the top teams. The team is using domestically-developed ‘Safir’ drone in this contest.

International Army Games 2018 is underway in seven host countries of Russia, China, Kazakhstan, Belarus, Iran, Azerbaijan and Armenia and will run through August 12.