Mosul and its people rise from the ruins

Euronews |  Monica Pinna: On The 10th of July 2017 the Iraqi government declared Mosul “liberated” after nine months of battle in which it was backed by US-led coalition and Kurdish forces. ISIS had occupied Mosul for three years. The death toll is still highly uncertain, ranging from 9,000 to 11,000, according to various sources. Some local sources even consider these figures underestimated.

It feels like war has just finished in Mosul. One year after ISIS fell, even the rubble is still there hiding bodies and unexploded munitions. There are 8 million tons of explosives in the debris, according to the United Nations. No more than thirty square kilometres of the Mosul district have been cleared. In spite of this, over eight hundred thousand residents have returned. Others have never left, including Adil Abdul Ghany. He paid a high price for opting to stay

“I was about to open the door with my children, when an explosion hit us,” he tells Aid Zone. “I lost consciousness. My daughter died at the hospital and my son on the way”.

The children were a 3-year old boy and an 11-year old girl. Another daughter Nada survived, but lost her leg, as did her father, who worked as a taxi driver. Now his taxi lies destroyed in the courtyard and his hopes of rebuilding a livelihood depends on him getting back his self-sufficiency.

Adil and Nada are among the more than 7,000 patients who, since 2014, have received rehabilitation sessions from Handicap International. The NGO, financed by the EU Humanitarian Aid Department, help them prepare to receive a prosthetic limb. Due to a reaction to it, they both require extra rehab sessions.

“We have several kinds of patients,” says Khalid Abdul Rahman, a physiotherapist with Handicap International. “We have fractures, we have amputees, burnt, some spinal cord injuries because of the shelling. We have two kinds of follow up for the patient before fitting and after fitting. After fitting we are doing the follow up for the patient for three times, to be sure that the device is positive or negative”.

With the end of combat operations in Mosul and other areas formerly held by Islamic State, Iraq has entered another phase of humanitarian crisis. Key challenges for the EU, as one of the main donors in the region, are mostly linked to protection and rehabilitation.

Luigi Pandolfi of EU Humanitarian Aid spells out the humanitarian costs of the Mosul conflict: “The level of destruction that is still visible in the western side of the city clearly shows the scale of the human cost of the battle. During the battle for Mosul 14,000 civilians got injured of which 32% were children under five. Despite we are one year after the end of the hostilities, still it is estimated that 4,000 individuals are in need of rehabilitation care”.

In a city where the health system is still in ruins, Handicap International and the Italian NGO Emergency work closely together to help victims of war become self-sufficient.

One of those is Adil Khalid Basheer, who also fell victim to ISIS’ reign of terror.

“On the 3rd March 2017 while I was trying to escape I faced ISIS on the way,” he says. “They captured me, and I thought that if I told them that I wanted to run away they would kill me, so I said I was there to take some wheat to feed my family and ten days later they cut my hand off.

“They assembled people by announcing through loudspeakers that they had captured three thieves. Then they took a butcher’s knife and they cut my hand.”

As we spoke to him Adil was receiving a last check at his home in west Mosul before being referred to aid group Emergency’s Prostheses’ centre in Sulaymaniyah. The physiotherapist checked for swelling, and his arm’s range of motion.

We joined him on his journey to eastern Iraq to receive a new hand. Immediately out of Mosul, during our 6-hour drive towards Suleymaniyah, we crossed vast areas heavily impacted by the conflict. ISIS-built trenches and explosive devices can be spotted along the way, as well as IED fields identified by Norwegian People’s Aid. The NGO, financed by the EU, is conducting surveys on “Suspected” and “Confirmed Hazardous Areas” and clearance. Nearly 12,000 square meters have been cleared around the village of Badana.

According to the NGO the exact amount of the so called “contamination” in Iraq is still unknown and clearance might take decades.Since the liberation of Mosul nearly 200 people have been killed or injured by the explosion of improvised explosive devices.

ISIS became more and more proficient in producing complex and highly lethal IEDs, according to Christian Ramsden of Norwegian People’s Aid: “ISIS has developed varying types of IEDs, some are very complicated, the ones we have here in the area of Mosul are more complex because they use things such as anti-cut features on the IED, where if you cut it it would set off the device. They also used a feature known as crushed wire which is a very thin very difficult to see cable, I should say wire, piece of wire that has small contacts on them. When they are pressed it sets off the device as well.” 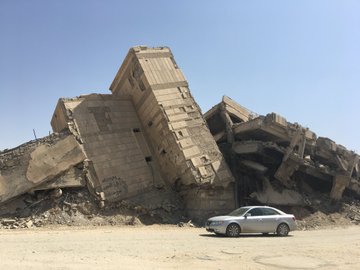 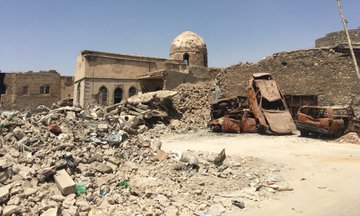 AID ZONE- one year has just passed by since ISIS fell in Mosul. Are residents coming back? What’s the EU humanitarian response to the crisis triggered by the conflict? Watch our next episode of Aid Zone on euronews

In 1998 Emergency opened a rehabilitation centre in Sulaymanyiah The Italian NGO chose this area because it had bee heavily mined during the 1991 Gulf War and 2003 invasion of Iraq. Today patients arrive from all over Iraq, but even from Iran and Syria. Some 5,500 people are on its books now, including Adil.

“The procedure in which we took a cast for this patient, e call it taking measurements, or making the negative cast of them,” explains Barham Jamal Aziz, an orthopedic technician at the clinic.

Technicians will then fill this cast with plaster to form a “positive” mold that will then be used as a base to form a polypropylene hard socket. The different components are chosen in accordance with the need of the patient. Over 60% of them came here with a below-the-knee amputation. Only 3% like Adil, with an upper limb amputation.

Barham shows Adils new prosthesis: “This is a mechanical hand. It has a cable here, we fix the cable to the patient’s shoulder. When he contracts the shoulder he opens the hand”.

It is usually the patient who choses whether to use a mechanical or a cosmetic hand. Once the decision is made, the components will be assembled in the workshop.

Each technician produces an average of three prosthesis a week depending on the complexity of the case. Adil received his new hand in just five hours. As with his home city Mosul, Adil’s road to recovery has just begun.