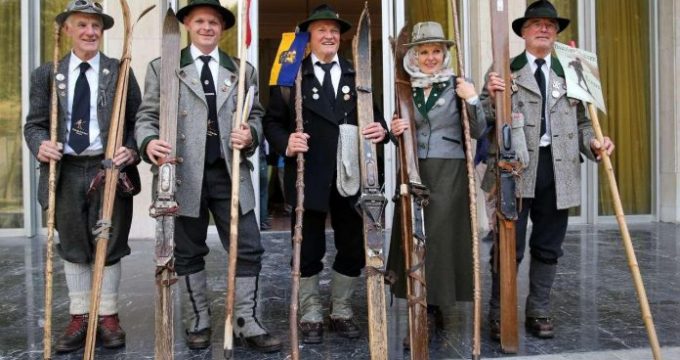 IFP – The Damavand 2018 Symposium was recently held on the occasion of the 175th anniversary of the first European ascent of Mount Damavand by Austrian climber, botanist and scholar Theodor Kotschy.

The event was held on July 20 at the Niavaran Historical and Cultural Complex, north of Tehran. The ceremony was attended by ambassadors of Austria and Mexico to Tehran and Ali Asghar Moonesan, the Head of Iran’s Cultural Heritage, Handicrafts and Tourism Organisation (ICHTO). According to Miras-e Arya, Moonesan told the symposium, “I am very pleased to attend this summit on the occasion of the anniversary of the first ascent of a European to the peak of Mount Damavand; a ceremony to commemorate an Austrian climber, scientist and researcher who has managed to climb Damavand.”

“Fortunately, the relationship between Iran and Austria is already at a very good level, and there exist friendly ties between the two countries. When Iranian people hear the name of Austria, the first thing that comes to their minds is the Austrian culture, especially Austrian music,” said Moonesan.

He further mentioned that art and culture are factors that contribute to proximity of nations. “The artist conveys the most beautiful human concepts including kindness, compassion, friendship, and peace in the form of art to his fellows.” Austrian ambassador to Iran, Stefan Schulz, also hailed the holding of such a symposium in Iran, expressing his satisfaction with the ceremony and appreciated the efforts by the ICHTO for hosting the event.

“The presence of the Iranian and Austrian climbers in the ceremony reflects the unity and interconnectedness of the two countries of Iran and Austria, and a sign of their sympathy for preserving achievements in a cultural atmosphere based on the interaction between Iran and Austria.”

The Ambassador of Austria to Iran went on to say, “The Damavand Symposium 2018 is one of the biggest cultural events of the two countries, whose cultural relations date back to 500 years ago.”

“I am very pleased to announce that with the assistance of the Federation of Mountaineering of Iran and Austria, a mountaineering training centre has been launched to focus on mountain rescue, while cooperating on medicinal plants based on an agreement between four Austrian universities and a university in Iran is encouraged. In addition, a joint study course on sustainable tourism will begin with the cooperation of an Austrian institution,” noted the Austrian official.

The Austrian Ambassador to Iran also pointed out that on August 9, a number of Iranian and Austrian climbers are going to climb to the summit of Mount Damavand in a joint program.

Through such sporting and cultural events they want to show that Iran and Austria will adhere to all their commitments in various fields, he added.

After the end of the symposium, Moonesan together with the Austrian ambassador visited the photo exhibition of Iranian and Austrian climbers who ascended to Mount Damavand.