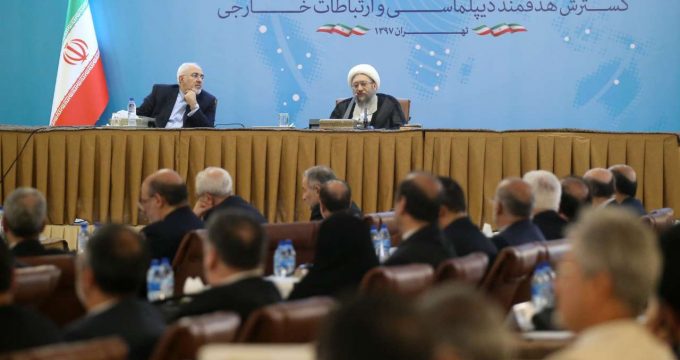 “Despite the illusions of the Americans and their delusional president that expects the Islamic Republic’s officials to make phone calls to him, the pressures of the US and its regional puppets have made our nation more united,” Ayatollah Amoli Larijani said, addressing a meeting of heads of Iran’s diplomatic missions abroad, held in Tehran on Sunday.

He further expressed his gratitude to Rouhani for his firm stance earlier in the day against the United States’ moves and threats, and said, “The president’s remarks today were really dignified.”

“Today, the country’s branches of power are in harmony,” the judiciary chief said, adding that all Iranians have “a religious, moral, and rational duty” to struggle and resist against the enemy’s hegemony to foil its plots.

Addressing the meeting earlier on Sunday, Rouhani warned his US counterpart not to play with the lion’s tail after Donald Trump’s push to halt Iran’s export of oil, saying a war with Iran would be “the mother of wars” and that control over the Strait of Hormuz is only one of Iran’s advantages.

An individual with even a basic knowledge of politics would never talk about a halt to Iranian oil exports, Rouhani said.

He also stressed that Iran has been a guarantor of security in the region’s maritime routes, saying the Strait of Hormuz is only one of the straits that Iran has control over.

“Mr. Trump! Do not play with the lion’s tail, (because) you’ll regret it. You are unable to provoke the Iranian nation against Iran’s security and interests,” Rouhani underlined.

A number of top Iranian military officials supported the idea afterwards, saying Iran has the ability to shut down the Strait of Hormuz if necessary.

On Saturday, Leader of the Islamic Revolution Ayatollah Seyed Ali Khamenei praised Rouhani’s firm response to the US threat to halt Iran’s oil exports, saying his significant stances that signify the Establishment’s policy must be seriously pursued by the Foreign Ministry.