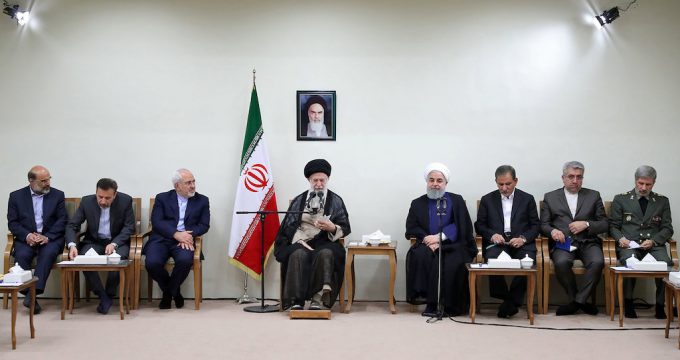 Europeans must give necessary guarantees on JCPOA: Ayatollah Khamenei

Press TV – Leader of the Islamic Revolution Ayatollah Seyyed Ali Khamenei says European signatories to the nuclear deal with Iran, known as the Joint Comprehensive Plan of Action (JCPOA), must provide Tehran with necessary guarantees about the continued implementation of the deal.

The Leader made the remarks in a meeting with Iranian President Hassan Rouhani and his cabinet in Tehran on Sunday. The meeting mostly focused on economic problems facing the country with Ayatollah Khamenei offering ways on how to overcome them.

Ayatollah Khamenei noted that drawing up a “stable economic roadmap” was needed to solve the country’s economic problems, emphasizing that solution of those problems must not be made conditional on the continuation of the JCPOA.

Leader of the Islamic Revolution Ayatollah Seyyed Ali Khamenei (C) addresses a meeting with Iranian President Hassan Rouhani (4th R) and his cabinet in Tehran on July 15, 2018. (Photo by leader.ir)

“Of course the European sides [to the JCPOA] are obligated to provide necessary guarantees with regard to the JCPOA, but the country’s economy must not be tied to this issue,” the Leader emphasized.

Since the US president pulled Washington out of the nuclear deal, European countries have been scrambling to ensure that Iran gets enough economic benefits to persuade it to stay in the deal. The remaining parties have vowed to stay in the accord.

Iranian Foreign Minister Mohammad Javad Zarif said on Saturday that the historic nuclear agreement was still a “triumph of multilateral diplomacy” even after the US pullout from the agreement.

“While we knew US can’t be trusted to keep its word—as its allies have now discovered—JCPOA proves that toxic unilateralism of Trump Admin means it can’t be relied on to honor any deal,” the top Iranian diplomat pointed out.

Elsewhere in his remarks, Ayatollah Khamenei lauded the “powerful” positions taken by President Rouhani during his recent European tour on the US threats to curtail Iran’s oil sales and said, “Appearing powerful in the face of foreigners, especially Americans is necessary and this step must be take on time, clearly and firmly.”

Underlining the necessity of expanding Iran’s diplomatic ties with other countries, Ayatollah Khamenei said, “Apart from a few cases such as America, the country’s relations with the East and the West must be increasingly bolstered.”

The Leader pointed to the existing economic problems and cited “strengthening the private sector,” “dealing firmly with lawbreakers,” “the administration’s supervision over financial transactions to prevent smuggling and money laundering,” and “taking the policies of the Resistance Economy seriously” as the main solutions to the economic problems that are currently nagging the country.