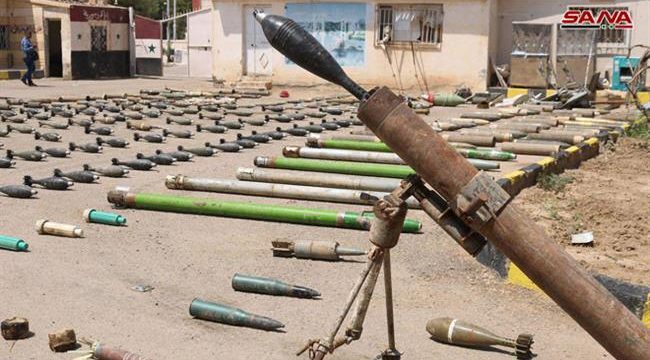 Press TV – Syrian government forces have discovered considerable amounts of munitions, telecommunication equipment as well as US-built mortar shells at a weapons depot of the Daesh Takfiri terrorist group in the country’s eastern province of Dayr al-Zawr near the border with Iraq.

Syria’s official news agency SANA reported that Syrian army troopers launched a clean-up operation in Hasrat town, which lies on the western outskirts of Abu Kamal town, on Saturday and uncovered a huge cache of ammunition and explosives.

An unspecified number of mines and explosive devices were also found, which Daesh Takfiris had planned to use to booby-trap residential buildings.

Meanwhile, foreign-backed militant groups in the Dara’a al-Balad residential area of Dara’a have begun handing over their heavy and medium weapons to Syrian government troops.

This picture shows munitions handed over by Takfiri militants to Syrian government forces in the Dara’a al-Balad residential area of Dara’a, southwestern Syria, on July 14, 2018. (Photo by SANA)

On July 12, Syrian army soldiers raised the national flag over several buildings in Dara’a after foreign-backed militants agreed to leave the region under surrender deals negotiated with the Damascus government.

State television reported that the Syrian military had managed to enter the militant-held part of the city and hoist the flag near its post office.

This picture shows munitions handed over by Takfiri militants to Syrian government forces in the Dara’a al-Balad residential area of Dara’a, southwestern Syria, on July 14, 2018. (Photo by SANA)

Russia has been helping Syrian forces in an ongoing battle in the province of Dayr al-Zawr as Daesh struggles to keep its last positions in eastern Syria.

The Russian military assistance, which began in September 2015 at the official request of the Syrian government, has proved effective as the Syrians continue to recapture key areas from Daesh and other terrorist groups across the country with the backing of Russia’s air cover.

On May 21, the General Command of the Syrian Army and Armed Forces announced in a statement that complete security was restored to Damascus and its countryside after al-Hajar al-Aswad district and al-Yarmouk camp had been totally purged of Daesh terrorists.