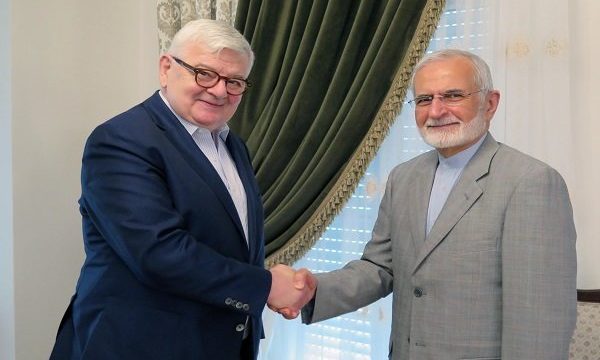 MNA – Former German Foreign Minister Joschka Fischer said Tue. that the Trump’s administration will continue with its pressure policy against EU if the bloc decides to give up on saving the Iran nuclear deal under US pressure.

Former German Foreign Minister and Vice Chancellor Joschka Fischer made the remark in a meeting with Kamal Kharrazi, the Head of Foreign Policy Strategic Council, on Tuesday in Berlin.

Fischer added that Europe is keen on convincing Iran to stay in the nuclear deal by providing the country with a package of proposals to counter US sanctions.

The Iranian official, for his part, stressed that Iran’s commitment to the JCPOA depends on EU’s strategy to counter US sanctions.

“In case US withdrawal from the deal prevents Iran from benefiting from the agreement, staying in the deal will naturally be of no use to Iran,” he added.

The two sides also conferred on regional issues, Europe’s role in preserving the nuclear deal, and the problems facing EU due to Trump’s polices and measures.

The US president announced on May 8 that Washington was withdrawing from the nuclear agreement and that he plans to reinstate US nuclear sanctions and “the highest level” of economic bans on Iran. Foreign ministers of Iran and the five remaining parties to the JCPOA, including Germany, France, UK, China and Russia, as well as EU’s foreign policy chief Federica Mogherini gathered in Vienna on July 7 to come up with a mechanism to safegaurd Iran’s economic interests in spite of US sanctions.