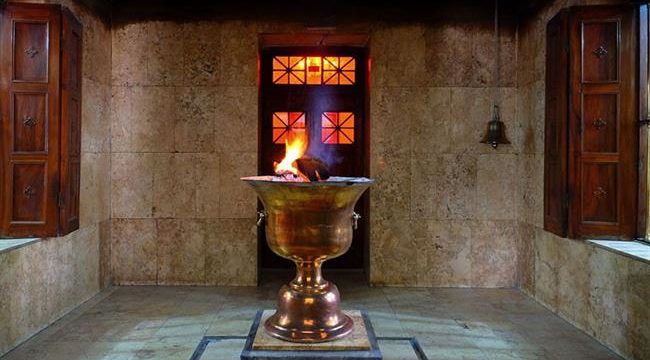 The holy place is among the most visited sites by tourists to Yazd. Although the building of the fire temple is not older than 85 years, the fire that was kindled more than 1,500 years ago is still burning and, since then, has never died down.

There is an interesting story behind this ancient fire. It is a flame taken from the extremely ancient fire which used to be alight in Karyan fire temple — one of Iran’s three main fire temples during the Sassanid Empire (224-651) CE — and transferred to Aqda, in Yazd Province, where it was kept for close to 700 years. In 1174, the fire was brought to Ardakan, located in the same province, from Aqda.

The fire kept constantly burning for 300 years in Ardakan. In 1474 the fire was carried to Yazd city where it was kept alight at the house of Khalaf Ali Khan, a prominent Zoroastrian cleric (known as mobed), for a while. In 1934, however, Bahram fire temple was constructed and the fire found a new residence.

While visiting the temple, domestic and foreign tourists have always expressed amazement at how this fire has survived wars and different historical events throughout all these years.

Located in a big yard dotted with cypress and pine trees, the main building of Bahram fire temple has been built on a height of about 21 meters above ground level.

The stone capitals in front of the fire temple’s porch, along with the petroglyph depicting the Fravashi carved above the portal of the temple, has added to its beauty and glory.

There is also a big pool in front of the building on which the temple is reflected. Seeing two pictures of the same building simultaneously in one landscape, has not only made the fire temple visually more beautiful, but is also indicative of its precise design and engineering.

The ancient fire is kept inside a glass case in a room within the fire temple. Visitors are only permitted to see the fire from behind the glass case. A man named Hirbod is responsible for keeping the fire alight.

Speaking to Iran Daily, Fariborz Shahzadi, the head of the Council of Yazd Province’s Mobeds, elaborated on the philosophy behind certain symbols representing Zoroastrianism as well as the present and past condition of Iran’s Zoroastrians, particularly, following the arrival of Islam.

Commenting on the historical background of constructing fire temples and different parts of their building, he said, “An Iranian Zoroastrian named ‘Master Fereydoun Jamshid Amanat’ chose the piece of land on which the building was constructed’.

He obtained the fund for building the fire temple from the Parsis — members of a Zoroastrian community mainly located in India.

“The temple was built between 1934 and 1939 based on models of fire temples in the Indian subcontinent.”

As was the case with other fire temples, a pool was built in front of Bahram temple so that Zoroastrians could perform their purification ritual, which is among the ancillaries of their faith and religion, he added.

“Above the portal of the building a petroglyph depicting the Fravashi, along with the triple slogan of ‘Good Thoughts, Good Words and Good Deeds — representing the three pillars of Zoroastrianism, has been carved.

“Fravashi is illustrated as a hawk or eagle which has spread its wings. Iranians used to call it ‘Homay’. As the ruler of the sky, an eagle has a vast ruling domain.

“Since during the Achaemenid Empire (550-330) BCE, a large part of the world belonged to Iran, Iranians decided to depict Fravashi as an eagle to be a symbol and emblem representing the country. Therefore, in addition to Zoroastrianism, Fravashi also represents and belongs to all Iranians.”

Commenting on the reason why there are cypress trees in the yard of the fire temple, and all places pertaining to Zoroastrians, he said any culture or religion has a sacred creature or tree.

“For instance, palm and camel are the sacred tree and animal of Arabs and Muslims, respectively’.

Pine was the sacred tree of the disciples and followers of Jesus Christ and deer is their sacred animal.

“That is why Santa Claus’ sleigh is drawn by reindeers. Since ancient times, Iranians used to respect cypress tree and sheep as the former represents freshness, happiness and resistance and the latter is a symbol of goodness and blessing.”

Commenting on the appearance of the fire temples in Iran prior to the arrival of Islam, Shahzadi said in the past, there used to be three or four minarets on top of the temples.

“As you know minaret literally means a place for fire. At those times, like churches, fire temples had bells and minarets. The bells used to toll five times a day to inform people of the times they should say their daily prayers.

On the method of transferring the fire to Yazd and Bahram temple, he said at that time, the biggest fire was the one burning at Karyan fire temple in Fars Province which belonged to the tribe living in the province and the regions clerics.

Divulging the secret how the fire kept at Bahram temple is still burning after 1,500 years despite the events that has taken place during this period of time, Shahzadi noted that the fire kept at the temple was transferred to Yazd before Karyan fire temple was destroyed.

“Prior to the (Islamic) Revolution, only a religious class was held at a high school in the Iranian capital to teach Avesta.

“This is while, currently, all of our children learn about their religion from the very first year of elementary school in all schools attended by Zoroastrians’.
“That is why currently, young Zoroastrians know more about religious issues than their parents did. Prior to the Islamic Revolution, religious issues were not given sufficient importance.”

July 8, 2018
Will Europe finally act independently of US?
Ex-CIA officer: US sanctions on China over trade with Iran may trigger chaos