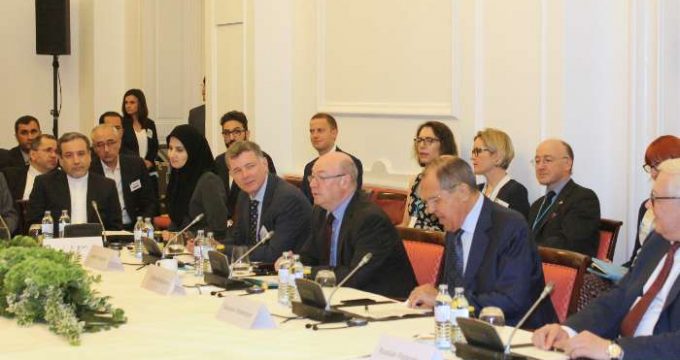 IRNA – The participants in JCPOA commission meeting emphasized continuation of implementation of international projects proposed in the nuclear deal, including Iran and Russia plan to convert the Fordow facility and modernization of the Arak heavy water reactor.

The ministers participating in the joint commission of the Joint Comprehensive Plan of Action discussed the US’ withdrawal from the deal, wrote the Russian Ministry of Foreign Affairs in a statement on Friday.

They recalled that the JCPOA is a key element of the global non-proliferation architecture and expressed their discontent with the US withdrawal from the deal.

The statement also said that Russia is happy that Iran has been loyal to its commitments.

It added that the JCPOA has proposed a step-by-step procedure to lift the sanctions on Iran.

The participants also said that they are determined to take actions to enable Iran to have economic and commercial cooperation even during the time of US illegal transnational sanctions.

Russia unconditionally supported the deal and said that it is determined to take necessary actions to effectively implement the agreements made in the framework of the JCPOA.

The meeting of the Joint Commission of the JCPOA ended in Vienna on Friday by releasing a statement calling for full and effective implementation of Iran nuclear deal.