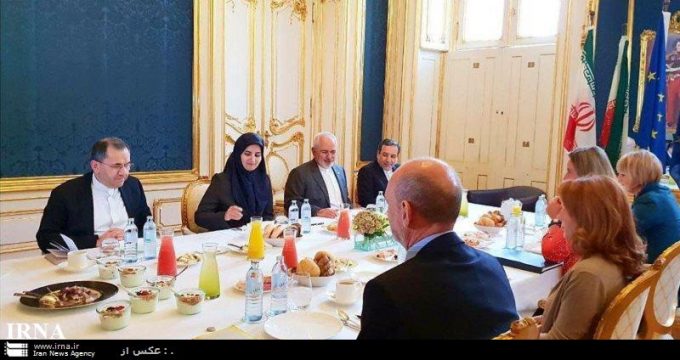 Mohammad Javad Zarif and Federica Mogherini, attending a working breakfast on Friday morning, discussed the future of Iranian nuclear deal, also known as the Joint Comprehensive Plan of Action (JCPOA) following the US unilateral withdrawal from the deal.

Zarif and Mogherini met in Vienna’s Palais Coburg Hotel, hours before the start of another meeting of the JCPOA Joint Commission which is going to be held there, with the presence of foreign ministers of 5 countries (UK, France, Russia, China plus Germany).

Speaking to reporters upon arrival in Vienna early Friday, Zarif urged the European Union to guarantee the rights of Iranian nation enshrined in the nuclear deal.

He referred to Washington unilateral withdrawal from the nuclear deal and said that following the return of parts of anti-Iranian sanctions after the US’s illegal action, Tehran expects other sides of the JCPOA to compensate it.

The meeting is to be held on Friday under presidency of Mogherini.

The foreign ministers of Iran, Germany, France, Russia, UK and China will attend the meeting.