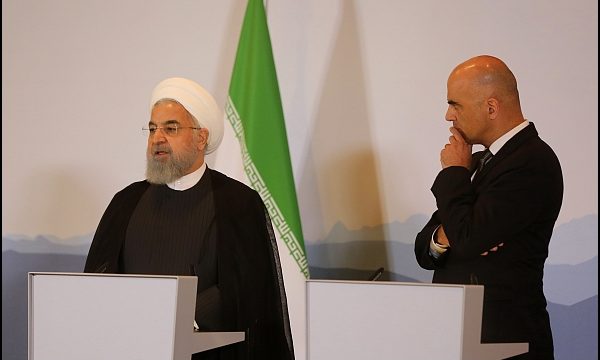 “Thank you President @Rouhani_ir for extensive talks held today in #Bern regarding the Iran nuclear deal and Swiss-Iranian relations. Open and frank discussions on bilateral Road Map,” Berset wrote on his Twitter account on Tuesday.

President Rouhani, leading a high-ranking politico-economic delegation, arrived in Zurich of Switzerland on Monday upon an official invitation by his Swiss counterpart Alain Berset.

According to Swiss Government media release, “Berset called on all sides to exercise restraint and not to jeopardize the nuclear deal with Iran (Joint Comprehensive Plan of Action; JCPOA) which is an unparalleled success for international diplomacy.”

“With regard to the announced re-introduction of US sanctions, Switzerland will strive to ensure that transactions involving humanitarian goods will still be possible in future.”

“The talks also addressed ways in which the two states could continue to exploit the potential of their bilateral relations in view of the announced re-introduction of US sanctions. Both sides commended the results of the Road Map agreed at the end of February 2016 and the successful intensification of bilateral relations that has followed.”

“Regular dialogues have been launched or resumed in the fields of economic affairs, finance, human rights, justice, civilian nuclear safety and migration. Switzerland considers these talks to be substantive, open and constructive. The death penalty was also discussed, the universal abolition of which is one of Switzerland’s priorities, as is the protection of minorities,” the media release reads.

In Austria, President Rouhani is scheduled to meet with top Austrian officials and sign several agreements on cooperation in various areas.