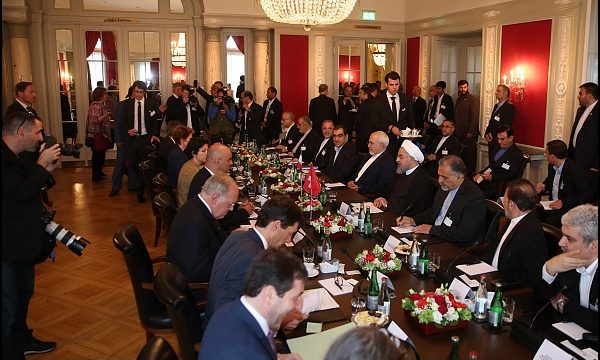 FNA- Iran and Switzerland have agreed to cooperate against possible US sanctions Tehran’s imports of medicine and basic pharmaceutical materials needed to produce drugs.

“Although the sanctions apparently do not include drugs, foodstuff and related materials, past experience has proved that they will include these fields too and the financial restrictions on the sales of oil and oil products would affect this sector too,” Iranian Health Minister Seyed Hassan Qazizadeh Hashemi said after inking a comprehensive document with Switzerland in the field of health and hygiene in Bern on Tuesday.

He explained that the Iranian and Swiss officials discussed ways to annul the sanctions which would leave impacts on the pharmaceutical sector, adding that a joint economic commission is due to be held to prevent possible problems.

Iranian President Hassan Rouhani is currently on a crucial visit to Europe, where he is expected to discuss the fate of the 2015 nuclear agreement after the US withdrawal and its threats of sanctions against Iran.

From Switzerland, the Iranian president traveled to Austria where he will meet President Alexander Van der Bellen and Chancellor Sebastian Kurz and oversee the signing of some documents for cooperation.

A key subject on the agenda, however, is a package which the Europeans are expected to offer to Iran in order to keep the country in the JCPOA.

Rouhani in a letter to his counterparts in the European and Latin American states last month outlined his country’s demands from its partners to remain under the 2015 nuclear deal, warning that time is running out and Europeans should race up to meet Tehran’s expectations.

Chief of staff of Iran’s president had confirmed earlier this month that Rouhani had sent a letter to EU leaders following the US unilateral pullout from the nuclear deal.

In the first part of the letter, President Rouhani has underlined Iran’s conditions to remain committed to the nuclear deal, specially the European states’ objective guarantees to meet Iran’s interests after the US withdrawal from the agreement.

The president has then complained about the European states’ defiance and violations in the implementation of the nuclear deal, including the major European banks that refrained from interaction with Iran.

In the third part, Rouhani has threatened the European leaders that Iran would withdraw from the nuclear deal if its interests and goals are not met.

In his letter, Rouhani has also cautioned the European leaders that time is running out and the EU needs to take an immediate decision about the nuclear deal.

US President Donald Trump announced on May 8 that the US would no longer remain part of the JCPOA and promised to re-impose the highest level of economic sanctions against Iran in response to Tehran’s development of its nuclear program.