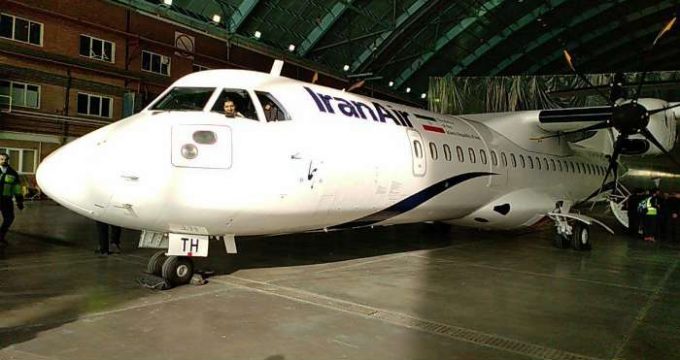 MNA – Franco-Italian passenger aircraft manufacturer, ATR, confirmed that it is seeking new export license from the US Treasury Department to allow it to deliver the final 12 ATR 72 planes already purchased by Iran.

According to ainonline, ATR, Franco-Italian passenger aircraft manufacturer, confirmed that it has applied for a new export license from the US Treasury Department’s Office of Foreign Assets Control (OFAC) to allow it to deliver the final 12 ATR 72s of an order for 20 of the 70-seat turboprops placed in 2016 by Iran Air.

Following the unilateral withdrawal of US, under the Trump administration, from the nuclear agreement of July 14, 2015, OFAC revoked ATR’s previous license that bars further delivery of commercial airplanes to Iran.

The new sanctions, to be imposed by November, effectively reverse the Obama Administration’s January 2016 settlement with Iran known as the Joint Comprehensive Plan of Action (JCPOA), which lifted earlier sanctions barring the sale of commercial airplanes containing a given proportion of US-made content to Iran in return for the Islamic Republic’s agreement to curb its nuclear program.

The new sanctions also prevent Airbus, ATR, and Boeing from selling parts and providing support for the airplanes already delivered. All contain more than the proportion allowed under US Commerce Department-established Export Administration Regulations (EAR) for sale to Iran. According to current regulations, an item made outside the US that incorporates controlled US-origin content exceeding the applicable de minimis percentage for a particular country stands subject to those regulations. The de minimis proportion generally amounts to 25 percent, but the percentage lowers to 10 percent when applied to Iran, North Korea, Sudan, and Syria.

Airbus, which sold a mix of 98 A320-family, A330, and A350 XWB jets to Iran Air in December 2016, delivered its first A321 in January last year. As of this May, Airbus delivered another six A320s and two leased A330-200s. Boeing, for its part, inked a “definitive agreement” covering fifty 737 Max 8s, fifteen 777-300ERs, and fifteen 777-9s valued at $16.6 billion at list prices with Iran Air in December 2016, and another for 30 Max narrowbodies four months later. Although it too secured an OFAC license to start deliveries, it never converted the agreements to firm orders as questions persisted over whether the Trump Administration would exercise its right to amend, modify, or revoke the license.