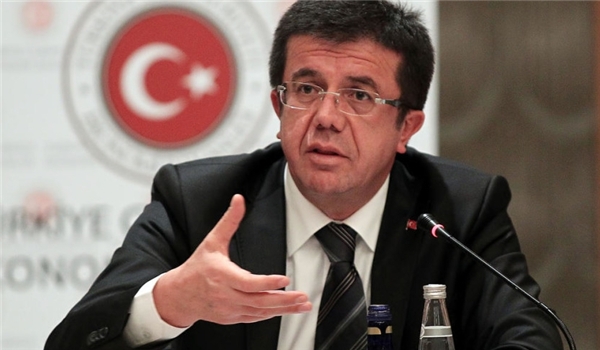 Press TV – Turkey says Washington’s demand to stop purchasing oil from Iran will not be binding for Ankara, stressing that it would only respect measures announced by the United Nations toward its eastern neighbor.

“The decisions taken by the United States on this issue are not binding for us. Of course, we will follow the United Nations on its decision. Other than this, we will only follow our own national interests. In addition, we will pay attention so our friend Iran will not face any unfair actions,” Turkey’s Economy Minister Nihat Zeybekci told reporters on Wednesday.

Zeybekci’s remarks come amid reports that Washington is already telling countries to cut all imports of Iranian oil from November. News agencies have quoted an unnamed senior US State Department official as saying that the administration of President Donald Trump is unlikely to offer any exemptions.

Meanwhile, Iran’s media quoted an official at the country’s Oil Ministry as saying on Wednesday that removing Iran’s crude oil from the market was “impossible” thing to happen.

“This big claim is not feasible because last month Iran shipped 2.8 million barrels of crude oil and gas condensate daily; this figure now stands at around 2.5 million barrels and eliminating it easily and in a period of a few months is impossible,” the official at Iran’s Ministry of Petroleum told Tasnim news agency.

Iran has been Turkey’s leading supplier of crude oil for most of the past two decades, ceding first place to Iraq only for three years during the recent period of US sanctions.

Turkey’s sole refiner, Tupras, which imports crude for three of its four refineries with a total capacity of 540,000 bpd, is believed to have a long-term purchase agreement with Iran under which it imports regular volumes at a small discount to regional prices, Platts news service reported.

Earlier in May, India had announced that it would not follow US sanctions on Iran. The country’s Foreign Minister Sushma Swaraj was quoted by media as saying that New Delhi would keep trading with Iran and would only follow sanctions imposed by the United Nations and not those imposed by any other country, such as the United States, against the Islamic Republic.