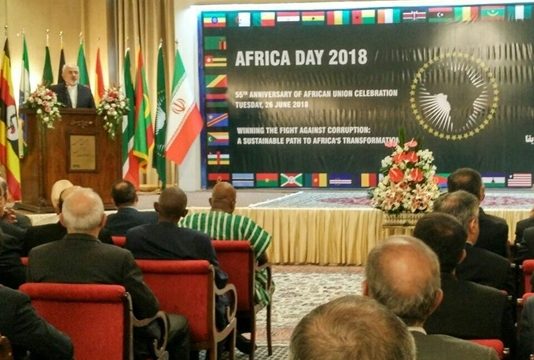 IRNA – Foreign Minister Mohammad Javad Zarif said on Tuesday that Iran-Africa ties are beyond political relations, as Iran has always given priority to the continent in its foreign policy.

Addressing ceremony marking International Africa Day, he added that since 1963, some 32 African countries have gained independence and got rid of arrogance.

In the movement, African states have sacrificed their wealth and resources to attain the sacred goal and this shows unity in the continent, Zarif said.

He further enumerated Africa’s numerous capacities for turning into an independent and modern continent.

He also recalled that African states have taken big steps in fields of transportation and solving civil conflicts and challenges.

The continent has also condemned US unilateral withdrawal from Iran nuclear deal known as the Joint Comprehensive Plan of Action (JCPOA), Zarif said.

The senior Iranian official also hailed African countries’ efforts to meet their nations’ needs to be able to bring democracy and prosperous economy and social welfare to them.

Elsewhere in his speech, he said that Iran has always taken sides with the African nations and has all the time put it on its foreign policy priorities.

Iran-Africa tie are not solely political; rather it is emotional and cordial, he said, noting that Iran’s private sector is eager to forge closer ties with African companies.