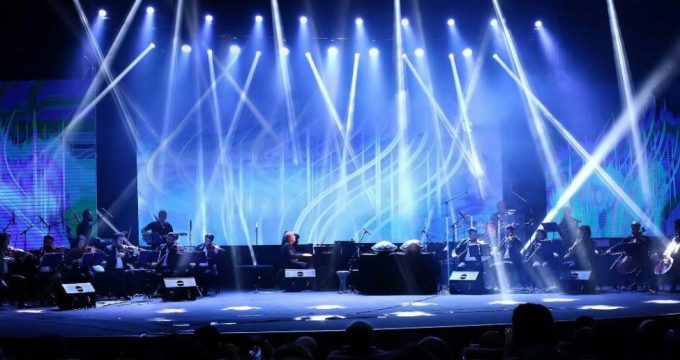 IFP- Renowned French pianist Richard Clayderman, known as the most successful pianist in the world, held his first-ever live performance in Iran on Friday.

Accompanied by a professional ensemble, Clayderman held the concert at the Interior Ministry’s Grand Hall in the capital Tehran.

During the concert, the French musician surprised his Iranian fans by playing the soundtracks of a number of blockbusting movies like Titanic (by James Horner) and Cinema Paradiso (by Ennio Morricone), a report by PANA said.

After performing each piece, he gave the sheet note of the piece to the enthusiastic audiences who stood with their hands raised to get it. Once, as a joke, he took up his chair and came towards the edge of the stage to give the notes to the standing audiences.

In an address to the audience during the concert, he said, “I’m aware that you know well some cinematic characters and actor and actress like James Band, Superman, Johnny Depp and many others but tonight I want to talk about them through these sheets.”

He then performed a number of most memorable music themes in cinema including 2001: A Space Odyssey, James Band, Mission Impossible, Edward Scissorhands, Leon, Game of Thrones and many others.

Istgah Band led by Mehdi Nowruzi accompanied Clayderman during the concert. He is set to hold his second performance on Saturday night. His concerts will continue on Sunday, Wednesday, Thursday and Friday nights.

He has recorded over 1,300 melodies and created a new romantic style through a repertoire which combines his trademark originals with classics and pop standards.

As of 2006, his record sales number stood at approximately 150 million, and has 267 gold and 70 platinum albums to his credit.

He is popular in Asia and is noted by the Guinness Book of World Records as being “the most successful pianist in the world”. Many people, particularly the younger generations, owe their interest in music to Claydermen and his music.

His concerts are organized by Royal Honar Institution.