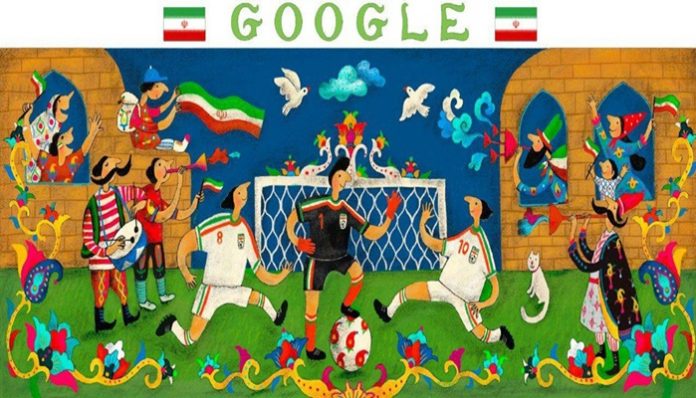 Kheiriyeh was born in 1979 in Iran’s southern city of Khorramshahr in Khuzestan province. She was just 9 months when the war between Iran and Iraq forced her family to move to Tehran.

She started painting at the age of 16 when she enrolled at high school to study graphics, and is still a painter now that she is teaching at the University of Maryland.

In Iran, in addition to designing the famous animation characters of Shekarestan (a popular animation series in Iran), she has created many illustrations and received numerous international and domestic awards. But her name was heard after her collaboration with Google for FIFA 2018 World Cup.

Rashin graduated from the Al-Zahra University in Tehran with a Bachelor’s and Master’s degree in graphics, and moved to the United States in 2011 to take a 6-month course of painting and hand-printing at the New York University Institute of Fine Arts.

In an Interview with Jame’e No, she has talked about her career. “I’ve been drawing illustrations for books for 20 years. About 30 books of mine have been published in Iran. I have published the same number of books through international publications.”

“After my immigration, I have published 10 more. I have collaborated with numerous publishers in France, Italy, Japan, Korea, China, India, Brazil, Germany, Switzerland, etc. My first book after immigration was Two Parrots (a personal recount of the story of Rumi’s The Merchant and the Parrot). I wrote the story and did the illustrations.”

“I also drew the illustrations of the book Ramadan, published by famous Simon & Schuster Publications. The most recent book of mine is Saffron Ice Cream which was published by the publisher of Harry Potter series, Scholastic Co.”

Rashin Kheiriyeh is one of the 32 graphic designers that Google has received help from in designing the doodles of the national football teams attending the FIFA World Cup. These designs were unveiled last week with the start of the World Cup in Russia, and afterwards Rashin’s name was heard very much in the social media, especially among Persian speakers.

Deformed characters and exaggerated figures are a hallmark of Rashin’s designs that could also be seen in her work for Google.

“The deformity of the human and animal figure makes the work comic. My audiences are mostly children. I like children to laugh and rejoice by seeing my designs in story books. The simpler the layout, the more it remains in the minds of the children,” she noted. On her collaboration with Google she says, “A few months ago, I received an email from Google asking for cooperation for the World Cup. They said they should first sign a confidentiality contract. Then, they contacted me and said they wanted to work with 32 graphic artists and illustrators from 32 countries to design special logos for the teams at the FIFA 2018 World Cup. In their emails, they explained that we should show a combination of football and the culture of each country. They did not want the designs to be very traditional. I created a lot of draft designs and tried to use Islamic designs and flowers and birds that are well-known Iranian symbols. I also used Iranian symbols on the shirts of the characters and on the ball. I designed the football field in a village with cozy homes where women and children were cheering. I also added a Persian cat, which is my signature in my works.”

In response to a question about  women’s presence in her works she replied, “Basically, as I wanted to show Iranian women and their interest in football, I had to remove the stadium. Because women in Iran are not allowed to go to the stadiums. If I had shown them in the stadium, it would have been a bigger mistake. And if there was a stadium without women, it was not logical. As a result, I took the football field to an Iranian village so that women could be shown in it. Except for the players who should be male, the number of spectators is equal in terms of gender.”

Rashin believes that as her illustrations for the children’s books were well received at the international level and appreciated by the critics of the children’s books, Google has selected her. “They were looking for some artists who could showcase their traditional and modern culture,” she underlined.

“In fact, I am the only graphic artist that designed the logo using a paintbrush. The others had designed it digitally. I think that’s why they selected my work to be shown on their Instagram page.”

This Iranian artists further mentioned that her colleagues at Google welcomed the project and said if the Iranian national team can advance to the next stage, Google would ask her to submit a new design.

“I really hope to see Team Melli in the next stage. That’s because of the Iranian people and especially my dad. My dad is watching football every day. His craze for football is unbelievable. I dedicate this painting to my father.”