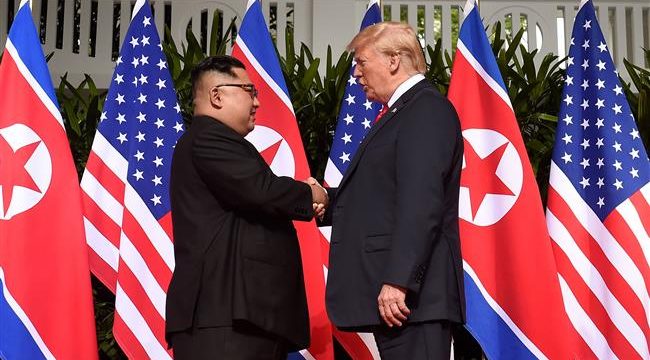 MNA – Internationally recognized strategist of the multipolar world and the founder of Difference Group Dan Steinbock said Trump pulled US out of JCPOA under the name of freedom and democracy, but in fact due to interest in Iran’s energy resources, to reduce Iran’s regional importance, and to foster internal division.

Leaders of two historically hostile countries for over half a century, shook hands on June as they posed for photographers in Singapore Summit; US President Donald Trump and North Korean leader Kim Jong-un pledged on Tuesday to work towards complete denuclearisation of the Korean Peninsula while Washington committed to providing security guarantees for its old enemy.

This happened one month after Trump, according to his own words, tore an important international deal, i.e. Joint Comprehensive Plan of Action (JCPOA) and announced that he was pulling the US out of the Iran nuclear deal.

Research Director of International Business at the India, China & America Institute Dr. Dan Steinbock pointed to pressing environmental concerns, Pyongyang’s feeling about its strong hand for talks, and Trump’s more willingness to talks than his predecessors, as three important incentives for North Korea to give OK to nuclear negotiations with US.

Regarding Trump’s efforts to rip up a previously-signed deal, but to hold negotiations, on the other hand, with North Korea regarding the same issue, Steinbock noted that “unlike Iran, North Korea is not a major energy producer in a strategic region and lacks the kind of geopolitical clout Iran enjoys in the Middle East. In view of the Trump administration, it is these two factors –regional might and its energy resources – that make Iran very different from North Korea.”

Here is the full text of his interview with Mehr News correspondent Lachin Rezaian:

What was the most important incentive for North Korea to give OK to nuclear negotiations with US?

In Pyongyang’s view, North Korea’s quest for nuclear weapons has been completed. With requisite nuclear capabilities, perhaps Pyongyang felt it had the strong hand it needed for talks.

Reportedly, there were also pressing environmental concerns. Last September, after a test of a hydrogen bomb, a 6.3 magnitude earthquake was recorded as a result of the detonation. It was followed by a 4.1 magnitude quake, due to a suspected cave collapse. Chinese scientists have warned that North Korea’s nuclear test site is at risk of imploding. So even if further tests were needed, they posed increasing risks.

Finally, nuclear talks require two parties. President Obama ignored the opportunity for talks when Kim signaled such an opening. Senator Clinton flirted with regime change in the region. These views have been shared by surprisingly many in the Congress. Setting aside the aggressive bilateral rhetoric of the past year, Kim knew that Trump would be more willing to talk than his predecessors. So, it was time to talk.

Nuclear talks require two parties; Kim knew that Trump would be more willing to talk than his predecessors

Why did Trump decide to rip Iran nuclear deal, but insist on nuclear talks with North Korea? Is it a kind of Trump’s double standard? What are the consequences?

Yet there are odd parallels as well. For decades, both Iran and North Korea have been seen as threats in Washington. In both cases, US has favored regime changes. In North Korea, destabilization efforts were initiated during the Korean War in the early 1950s. In Iran, similar attempts began concurrently as the democratically-elected Prime Minister Mohammad Mosaddegh was overthrown by the US CIA and British MI6. In North Korea, Washington failed to beat Kim Il-sung. In Iran, the coup d’état paved way to the Pahlavi decades.

Through the 1960s and 1970s, North Korea was on the backburner of US geopolitics, even as a state of war has prevailed between the countries. In contrast, the ties between the Shah and the US grew intimate, but at heavy cost to Iranian people, due to the terror regime, the brutal security apparatus (SAVAK), and development that mainly served the needs of a tiny oligarchic elite in Tehran.

After the Islamic Revolution, the US-Iran ties were frozen practically three decades until the multilateral nuclear deal (JCPOA). As the Six-Party Talks did not lead to parallel talks, North Korea pressed ahead with its nuclear program. Unlike Iran, however, North Korea is not a major energy producer in a strategic region and lacks the kind of geopolitical clout Iran enjoys in the Middle East. In view of the Trump administration, it is these two factors –regional might and its energy resources – that make Iran very different from North Korea.

There is thus a double standard that has prevailed through the postwar era. While the rhetoric is for freedom and democracy, actions only reflect interest in Iran’s energy resources, reduced regional importance, and efforts to foster internal division.

Do you believe that the US-North Korea joint statement in Singapore has the potential to take forward the objective of denuclearization?

The joint statement has potential to take forward the objective of denuclearization but whether, how and when that potential can be achieved is a different story. The four-point agreement seeks to achieve the “complete denuclearization” of the Korean peninsula. However, it does not include a “verifiable” and “irreversible” pledge by North Korea to abandon its nuclear weapon program.

The agreement is not a final or even an intermediate deal, but rather a “memorandum of understanding.” This is not to downplay the importance of the US-North Korean rapprochement. US and North Korean leaders have never met before. So for these two leaders to sit down and outline a path to resolve those disagreements is a big deal.

The Singapore deal highlights a promising understanding. But that’s all for now. A real peace and stability requires far more.

In view of the Trump administration, it is these two factors –regional might and its energy resources – that make Iran very different from North Korea.

What do you think are included, and should be included, in US-North Korea talks other than nuclear issue; e.g. North Korea’s human rights record, cyberattacks, bank heists, and missile technology?

The broader the scope of the proposed talks, the less likely will be any actionable outcomes. It would be thus preferable for the two parties to focus only on the nuclear issue that may permit some compromise. That should be the immediate, short-term objective.

Even if Washington and Pyongyang could agree on procedures to avert nuclear weaponization in the Korean peninsula, that will not mitigate all tensions in the region. Only peace and demilitarization might.

Why the peace agreement

Pyongyang has seen America as an existential threat, for a reason. In 1951 – after Washington had lost its nuclear monopoly to the Soviet Union – the early setbacks in the Korean War prompted General MacArthur to consider using nuclear weapons against the Chinese and North Koreans until he was dismissed by President Truman.

Nevertheless, between 1950 and 1953, the US subjected North Korea to a devastating bombing campaign, which destroyed 85 percent of the country’s buildings and caused one million civilians to perish. It set the standard for US interventions in Vietnam and the rest of Southeast Asia. Yet, since the 1953 Armistice Agreement, Washington has seen North Korea as a “rogue state.” Even with the Soviet Union, Washington supported “peaceful coexistence”, but with North Korea, only a “temporary ceasefire.” Pyongyang’s concerns for US intrusion are not without a basis.

As Washington insiders acknowledge, for a long time, Pyongyang has sought a peace treaty to replace the [1953] ceasefire. North Koreans want peaceful relations with the US and regional neighbors. The real question is what is that the US really wants in the region.

Why demilitarization is the key to neutralize tensions in the region?

In his 2013 New Year’s address, Kim Jong-un advocated “a radical turn in the building of an economic giant on the strength of science and technology by fanning the flames of the industrial revolution in the new century.”

Instead of seizing the transition in Pyongyang to work for the peace, President Obama opted for cooperation with the then-President of South Korea, Park Geun-hye, the conservative daughter of the controversial former President Park Chung-hee. Instead of rapprochement, Washington pushed for a Terminal High Altitude Area Defense (THAAD); an anti-ballistic missile system in South Korea that is officially a means to subdue Pyongyang and, unofficially, to contain China. Yet, these plans complicated in early 2017, when President Park was impeached and sentenced to 24 years in prison. That paved the way to the presidency of the more moderate Moon Jae-in, who seeks reconciliation with North Korea.

The US withdrawal from the Iran nuclear deal is a serious breach in international relations and one that will tarnish American credibility for years to come.

Nevertheless, Park’s hawks were able to postpone the repeal of the Operation Control agreement (OPCON), which allows the Pentagon – not Seoul – to control its military fate. The mission of the South Korea/US Combined Forces Command (CFC) is to “deter hostile acts of external aggression” South Korea by a “combined military effort.” The CFC is commanded by a US General and it has operational control (OPCON) over more than 600,000 active duty military personnel both countries. President Park managed to defer the transfer to 2022. In the event of war, US interests will thus override the interests of South Koreans – in their own country.

President Park managed to defer the transfer to 2022. In the event of war, US interests will thus override the interests of South Koreans – in their own country.

How do you evaluate the future scenarios for US-North Korea ties, regarding US breach of Iran deal?

The US withdrawal from the Iran nuclear deal is a serious breach in international relations and one that will tarnish American credibility for years to come.

In the short- to medium-term, denuclearization efforts alone will prove challenging. In the medium- to long-term, peace agreement and US withdrawal from the region are vital conditions. Yet, it is hard to see how the White House would agree to them.

Worse, there are a series of very near-term challenges in US politics that have potential to undermine or dilute the agreement. The latter is predicated on a Trump administration that will continue to support the talks. It thus presumes failed impeachment efforts and minimal losses for the Republican incumbents in the US mid-term elections.

As Trump’s tacit timeline suggests critical bilateral steps in the early 2020s, the US-North Korean agreement is predicated on another Trump election triumph in 2020 and continued support for the peace process in South Korea’s 2022 election.

Any step toward peace is positive. However, a number of far more critical steps are required to denuclearization to peace agreement and US withdrawal, amid rapidly-fluctuating US politics that may change – as happened in the case of Iran.

Dr. Dan Steinbock is an internationally recognized strategist of the multipolar world and the founder of Difference Group. He has served at the India, China and America Institute (US), the Shanghai Institutes for International Studies (China) and the EU Center (Singapore). For more, see https://www.differencegroup.net/