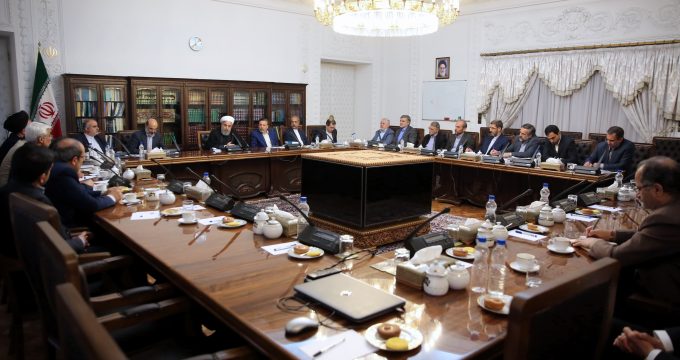 president.ir- President described the state TV, Islamic Republic of Iran Broadcasting (IRIB), as being at the forefront of enemies’ psychological war, which is aimed at killing people’s hope and trust, saying: “The national media has a very effective role in creating hope in people and increasing vitality and unity, as well as integrity in the society”.

Speaking in a meeting with IRIB chief and senior managers late on Wednesday, Dr Hassan Rouhani said: “The importance of IRIB is accepted by everybody and interaction between the government and the national media, which is at the heart of intellectual, cultural, social and media issues of the country, is very important”.

Today, social capital is the most valuable thing in the country, said the President adding: “Promoting trust and solidarity between people and the system is an important principle and the national media can have a very effective role in creating hope in the society”.

He also went on to describe IRIB as having a very effective role in national security, saying: “Today, we are in a situation where the most spiteful radical enemies are before the Iranian nation, and because of the 40 years of success in different international, regional and economic stability fields in the recent years, they are spitefully bearing animosity towards not only the system, but also the name and people of Iran”.

Stating that the enemies are angry because of the successes of the Iranian nation in different fields, Dr Rouhani continued: “Holding of great elections with people with different beliefs, religions and ethnicities taking part, fighting ISIS in the region and Iran’s effective role in regional security and stability, confronting enemies’ division-seeking acts and supporting the oppressed Palestinian people has made enemies angry”.

“Today, when the values of the Islamic Revolution of Iran has been effective in many places in the world and many countries and nations around the world have relied on these values, the enemies are trying to hatch plots against these values and we must stand against them with effort and sacrifice,” he continued.

He also said that the Iranian nation will never surrender to illogical pressures and plots of the government of the United States, adding: “We must attempt to alleviate people’s concerns about the future, which is what the enemy wants, and assure them that we will never let them have problems for supplying their basic needs”.

The government will never let production to cut back, added President Rouhani, saying: “The national media can do well planning to boost hope and vitality in the society and mobilise the public opinions to fight and stand against targeted pressures of the enemies”.

He went on to refer to the successes achieved in the recent years, saying: “Today, everybody must put competition, complaints and upsets aside and be after overcoming issues with unity and empathy”.

“If we stand against the hostility and conspiracies of enemies, they will never be able to harm the Iranian nation and system,” added Rouhani.