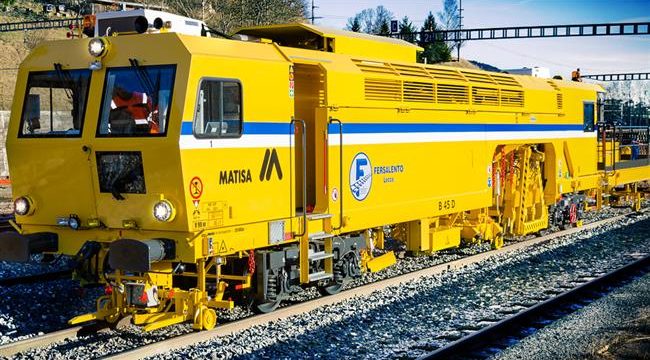 Under the MoU, Matisa will cooperate on overhaul and retrofitting of ballast machines, tampers and regulators as well as sourcing of 21 track machines with Iran’s RAI railway company, the report said.

RAI deputy head Maziar Yazdani said the initial value of the deal is 20 million euros, which will rise to 80 million euros later.

The agreement comes less than a month after the Swiss firm Stadler Rail said it was ditching a $1.4 billion railway deal in Iran because of US President Donald Trump’s decision to reimpose sanctions on the Islamic Republic.

“Switzerland has been a neutral country for hundreds of years, and we have decided to continue staying neutral on political issues,” Matisa CEO Franz Messerli said during the signing of the agreement in Tehran, according to Fars news agency.

A Matisa ballast regulator in operation

Stadler Rail had signed a letter of intent in Tehran at the end of February to deliver 960 subway cars. Its sales chief Peter Jenelten has said he was disappointed that the company had to terminate the agreement.

“The Swiss railway companies have invested heavily in the Iranian market. It is frustrating that all these efforts have now been for nothing,” he told Swiss German-language daily newspaper Blick.

Iran’s rail sector has become a magnet for rail engineering and rolling stock firms from all over the world, but European companies are most likely to lose out to their Russian and Chinese counterparts.

According to Jenelten, “the craziest thing about the story” it that US sanctions should benefit Russia and China in the first place.

“The Iranians cannot wait forever. That’s why the Chinese are likely to take the subway order away from us.”

Iran plans to become a transport hub in the heart of Eurasia where regional countries have drawn up their own development strategies.

Iranian officials have announced plans to invest $25 billion over the next 10 years in the modernization and expansion of the country’s railway network.