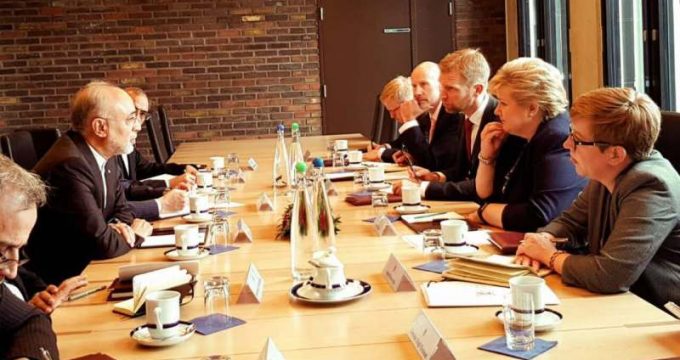 In a meeting with the Head of the Atomic Energy Organization of Iran (AEOI) Ali-Akbar Salehi, Solberg said Norway would persue this issue seriously.

She said Oslo is trying to remove the obstacles on the way of boosting all-out ties between the two countries.

Describing the current situation in the Middle East as ‘sophisticated’, she said Oslo’s policy is safeguarding peace, security, humanitarian assistance and peaceful settlement of regional crises.

Meanwhile, Salehi, for his part, said Iran is interested in boosting its mutual ties in economic, trade and investment arenas.

He said EU measures for countering US hostile policy are ‘inadequate’, adding that safeguarding the JCPOA needs the ‘transparent and serious struggle against the American President Donald Trump’s policies especially via EU.’

Salehi is currently in Norway at the head of a delegation to attend Oslo Forum.

Oslo Forum is a series of retreats for international conflict mediators, high-level decision-makers, and other peace process actors. It provides a discreet and informal space to reflect on current mediation practice, collaborate across institutional and conceptual divides and advance negotiations. From a modest gathering of mediators in 2003, the Oslo Forum has grown to become the pre-eminent retreat in the field of international peacemaking.