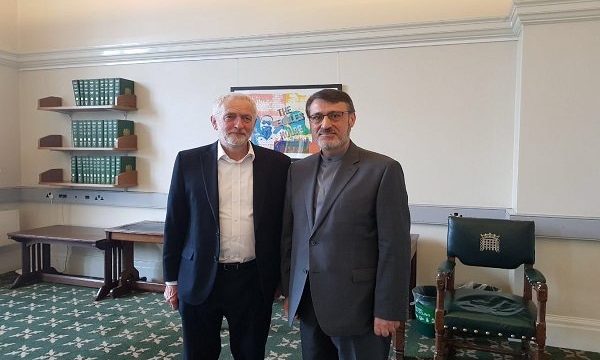 IFP- UK’s Labour Party Leader Jeremy Corbyn says the nuclear agreement with the Islamic Republic must be preserved and clear measures shall be taken to keep peace in the Middle East, Iran’s ambassador to London said.

Corbyn has made the comment in a meeting with Iranian Ambassador to the UK Hamid Baeidinejad.

Baeidinejad published photos of his meeting with Corbyn on his Twitter account on Monday, saying that “in the UK, the shadow government plays a major role in the country’s politics.”

“During my meeting with Mr Corbin, the leader of the Labour Party, a wide range of policy issues, including global and regional peace and security as well as non-proliferation and JCPOA were discussed,” he noted.

“I thank him for his vision and commitment to promoting peace,” Baeidinejad added. After US President Donald Trump’s withdrawal from the accord, the European countries reassured Iran that the bloc will remain committed to salvaging the nuclear deal with Tehran.

Since Trump announced on May 8 the US exit from the JCPOA, Europeans including the UK, France and Germany have vowed to do their best to keep Iran’s oil business and investment flowing, but have also admitted they will struggle to provide the guarantees the Islamic Republic seeks.