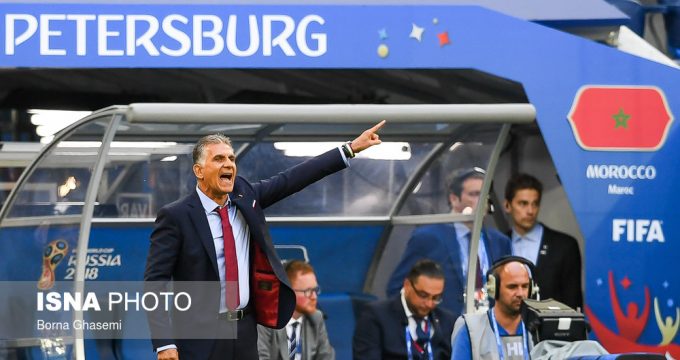 Iran have nothing to fear vs. Spain, Portugal – they have Carlos Queiroz

ESPN– Carlos Queiroz has guided three national teams to four World Cups but the game against Spain on Wednesday could prove to be his finest hour and a half, not just on the global stage but in a long and distinguished coaching career. If all goes well in Kazan vs. Spain, and then against Portugal in Saransk, the 65-year-old will have secured his reputation as one of the world’s top coaches.

He was already up there in the eyes of his Iran players after they threw him into the Saint Petersburg air following a 1-0 win over Morocco in the opening game of Group B. This is Iran’s fifth appearance at the World Cup and only their second win. It was a masterclass.

Iran showed their resilience, organisation and their coach’s intelligence against Morocco. Under the cosh in the early exchanges, Asia’s No. 1 team regrouped with midfielder Omid Ebrahim dropping a little deeper to help out the defence and then started to gradually wear down the North Africans. Morocco had been under-rated by some, but not Queiroz.

“Our strategy from the first minute was to create a mental collapse in the Moroccan players,” he said afterwards. “And we tried to do that by creating frustration and blocking all the play-makers.”

As the game progressed, Iran started to look more dangerous and got their reward in the final seconds as Aziz Bouhaddouz headed a free kick past his own goalkeeper. “Since we were able to create panic in their defensive line the game changed,” he added. “The players for Morocco knew we could win the game and that changed everything in the last minutes.”

The noise from thousands of Iranian fans inside the beautiful Saint Petersburg stadium would likley have been heard in the cruise ships moored nearby. It was a reward for seven years of hard work. In 2014, Iran took just one point from three games against Nigeria, Argentina and Bosnia-Herzegovina. With better players, especially in attack, there are more options, more expectations and confidence.

Asia’s best team have Asia’s best coach and together they have grown to become one that can go into the big games against big teams with confidence. For Queiroz this is the natural progression of his time in Tehran and many an argument with the Iranian Football Federation (IFF), club coaches, American sporting apparel giants and anyone who gets in the way of where the Portuguese tactician wants to take Iran.

The goal is to make the knockout stages for the first time in the country’s history. Spain are the next obstacle and what better test could Queiroz have? As well as the points, there is a chance to serve some cold revenge.

Spain opened the tournament with a 3-3 draw against Portugal in a thrilling clash in Sochi, the first time the two neighbours had met on the global stage since South Africa eight years ago. Queiroz was Portugal coach at that time in 2010 and following that 1-0 defeat, was soon out of a job. 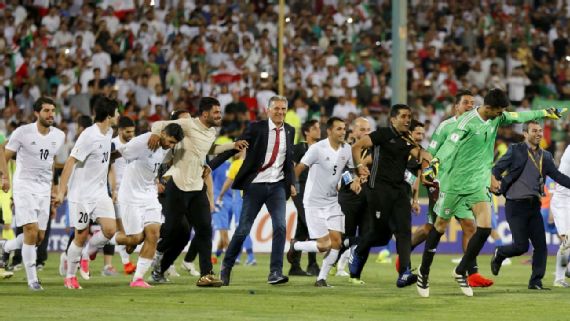 Getting one over on Spain for that loss (and by association his sacking by Real Madrid in 2004 after just one season) and Portugal, a game that he has been almost obsessing over for months, could make a good World Cup into something great.

Queiroz is a coach who does not always forgive and never forgets. A fiery character, he has resigned from the Iran job on numerous occasions before returning days or weeks later. He said before this tournament that he would leave at its end in response to the six-month contract that would take him to the 2019 Asian Cup in January. He wanted a four-year deal. IFF officials find him hard to work with but tolerate it for the obvious reason of results.

The siege mentality Queiroz has created is strengthened by Iran’s relative international isolation. Friendlies are hard to arrange and get cancelled easily while U.S. sanctions led Nike to announce before the tournament that it would not be able to supply the team with footwear. Queiroz labelled the company arrogant and demanded an apology. It makes the work done so far all the more impressive.

The coach feeds off such conflict and his team will not lie down in the upcoming games. “It was a beautiful win, three points, and now it is time to rest and think about the game against Spain,” he said. “Against Spain, everyone from the goalkeeper to the striker can create things so we have to think of a different strategy.”

He will. If Queiroz can get something in the next games against teams he knows well and would love to beat and takes Iran to the next stage, it would be a fantastic achievement. It would confirm that he is one of the best around and would surely give him the pick of jobs when he departs. Yet, no matter who comes calling, there seems to be something about Iran for Queiroz. The relationship is not always smooth but it gets results. And their World Cup is only just beginning.