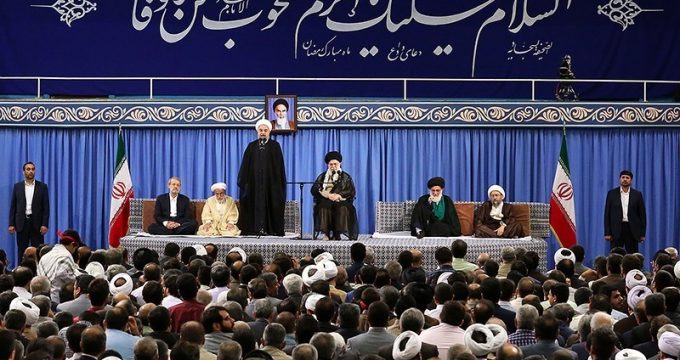 All countries must stand against White House rulers’ bullying

MNA – Iranian President Hassan Rouhani called on leaders of Muslim countries to stand against bullying power of the United States.

He made the above remarks in meeting of government officials, ambassadors of the Islamic countries and a great number of people from all walks of life with the Leader of the Islamic Revolution today morning on the occasion of Eid al-Fitr, whcih marks the end of fasting month of Ramadan, and said, “at the current situation, the enemy lacks experience and rationality. Not only it [enemy] breaches its commitments with the noble nation of Islamic Iran, but also it contravenes its regional and international obligations uniletarally.”

“It is surprising that a power who has the blood of the people of this region, ranging from Afghanistan, Iraq, Syria and Yemen to other regions, on its hands, has worn the mask of peace and speaks about negotiation, and the usurper regime, who is killing people every day, is traveling around to portray a false image of the Islamic Republic and people of Iran,” he continued.

“Today, people and countries throughout the world, Iran’s business partners, Europe, Russia, China, neighbors, Muslims and all countries must stand up to White House rulers’ bullying,” the president concluded.