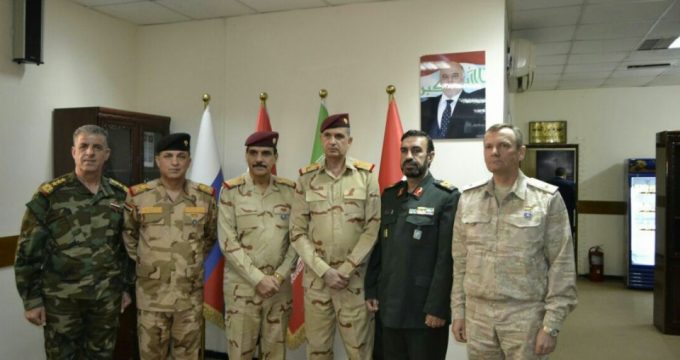 Representatives of four countries reviewed the security coordination in line with countering the terrorist groups, including Daesh (ISIS).

At the security meeting, the four countries also exchanged the latest information about terrorist moves and stressed the importance of strengthening and continuing quadrilateral cooperation in fight against terrorism, Daesh in particular.

During the Baghdad meeting, the Iranian, Iraqi, Russian and Syrian military officials presented reports on their counter-terrorism activities.

At the security gathering, Iraqi Army Chief of Staff Lieutenant General Othman al-Ghanmi appreciated the efforts made by the military forces of the four countries to defeat terrorists during the past three years.

Iran’s military attaché in Baghdad Brigadier Mostafa Moradian, too, called in the meeting for deepening quadrilateral cooperation to annihilate terrorism in the region.

Tehran, Baghdad, Moscow and Damascus formed an information center in 2015 in the Iraqi capital aiming to exchange the information [about the terrorist groups] and facilitate coordination [in line with fight against terrorism].