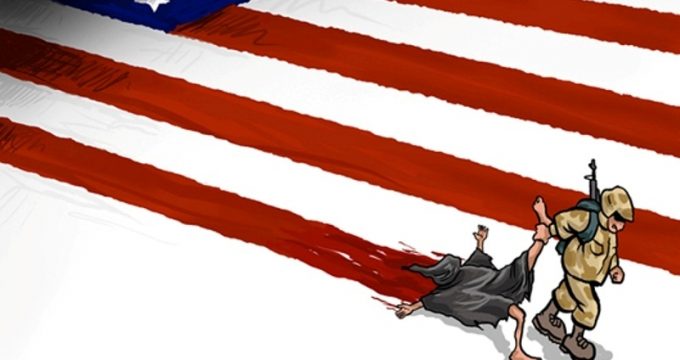 IRNA – Research Center of Iran’s Majlis (parliament) has published a documented 47-page report on human rights record of the United States on Wednesday.

‘Despite the abysmal record of the United States on human rights, both inside and outside the country, the US has always claimed to be the role model of democracy and human rights for the world. Such a claim has, especially in the past few decades, been utilized to interfere with other countries’ domestic affairs and violate their national sovereignty and their right of determining their fate,’ wrote Majlis’ report.

The report continues to read, ‘Knowing itself rightful of interfering with other countries’ affairs, the US administration publishes annual reports on human rights in some countries; and if the countries’ resist the US arrogant policies and excessive demand of Washington, they will be accused of violating the human rights.’

Islamic Republic of Iran that has fought with the US’ anti-human policies and stances has been the target of the US accusation more than any other country. The obvious manifestation of such an approach is seen in the oppressive sanctions of the executive and legislative branches of the US against the people of Iran. This is while the US government is a major violator of human rights both inside and outside their borders, the report said.

‘Historically speaking, since the thirteen states were a colony of British Empire and slavery had currency there, violation of most fundamental human rights has always been a noticeable characteristic of the US governments. Then, the American white Anglo-Saxons enjoyed rights of which Native Americans, African Americans, Asians, and Latinos were deprived.’

‘The white Americans had some privileges: the rights of voting, citizenship, migration, owning land, and judicial and educational privileges were legally limited to the white people, which went on even after gaining independence from the UK.’

According to Majlis report, the anti-human rights record of the US government took a more international dimension in the 20th century i.e. since the country gradually entered the world hegemonic powers.

After WWII, the US sped up the violation of human rights in the framework of the bipolar world. Relying on liberal democracy ideology, the US, as one of the two superpowers, called itself the leader of the so-called ‘free world’ and started to interfere with the domestic affairs of the countries that were kept backward in the name of fighting communism, led by the Soviet Union.

‘After the Cold War and disintegration of the USSR, the Americans found themselves in a unique situation; they had no powerful rivals. Promoting the illusive idea of ‘the End of History’, the US saw that the time was ripe for spreading American values around the globe. The approach was clearly manifested in George Bush, Sr.’s beliefs about New World Order; the ‘order’ he had in mind was based on US leadership and superiority of US values.’

According to the report, this approach has had an important role in forming US foreign policies in the third millennium. That’s why the US statesmen now claim the leadership of supporting human rights in the worldwide scale and as time passes they keep insisting on the claim.

Majlis Research Center reported, ‘The record of the United Stated proves the opposite; examining the US governments activities in the three national, regional, and international levels makes it clear that the US government has not been doing what it has been claiming. It has systematically and blatantly violated human rights and has not been accountable for that.’

Emphasizing the fact that the US human rights claims are baseless, the 47-page report elucidates a small number of US’s innumerable human rights violations in national, regional and international levels and proves with documents that the US government, as a major violator of human rights in the world, lacks the necessary qualifications and legitimacy to comment on other countries’ actions.

The data used in the report have been collected from information centers of other countries, international institutions mainly active inside the US.