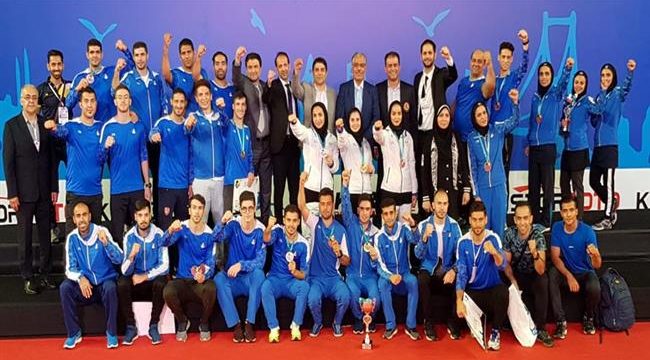 Press TV – Male and female Iranian karate practitioners from have shown great punching, knee strikes as well as open-hand techniques at the Karate1 Premier League – Istanbul 2018 in Turkey, and claimed the top position at the end of the prestigious international tournament.

The Islamic Republic of Iran stood atop the podium in the team chart, having won three gold, two silver and seven bronze medals.

Turkey finished in the third place with two gold, three silver and one bronze medals.

On Sunday, Amir Mehdizadeh overcame his Turkish opponent Eray Samdan 3-1 in the final bout of men’s minus 60-kilogram category to win the gold medal.

Mehdi Khodabakhshi grabbed Iran’s second gold of the day after he overpowered a karateka from Macedonia 7-3 in the title challenge of the minus 84-kilogram section.

Saleh Abazari stole the show in the men’s over 84-kilogram weight class, after he defeated a Dutch contestant.

Moreover, Seyyed Ali Karimi and Bahman Asgari took two silver medals in the minus 67-kilogram and minus 75-kilogram divisions.

Additionally, Zabihollah Pourshib in the minus 84-kilogram, Saman Heydari in the over 84-kilogram and Arak’s team (Abolfazl Shahrjerdi, Ali Zand and Milad Delikhoun) took three  bronze medals in the men’s kata contests.