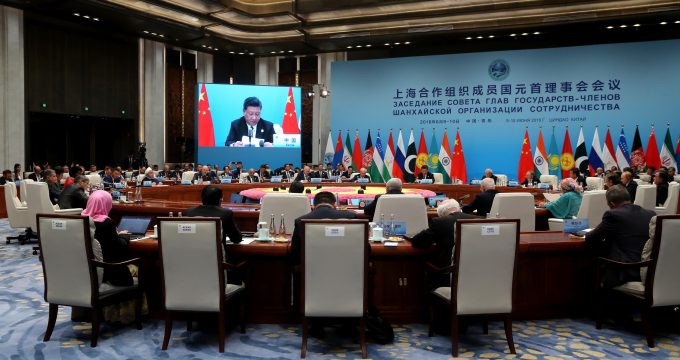 IRNA – Providing security is one of the most important goals of Shanghai Cooperation Organization (SCO), and the Member States should cooperate closely to achieve it, said Chinese Presidents in his opening speech at the 18th SCO summit on Sunday.

“We must… discard Cold War thinking, group confrontation; we object to acts of getting one’s own absolute security at the cost of other countries’ security,” said Xi Jinping.

“We reject selfish, shortsighted, closed, narrow policies; (we) uphold World Trade Organization rules, support a multilateral trade system, and building an open world economy,” Xi said in a speech in the port city of Qingdao, inferring recent economic policies of the US government.

The United States increased tariffs on imported Chinese goods and China took up a tit-for-tat policy to counter the move.

Xi also added, ‘China will set up a 30-billion-yuan (4.7 billion US dollars) equivalent special lending facility within the framework of the SCO Inter-bank Consortium.’

He also said that the pact now encircles 40% of the world’s population and about 20% of the world’s economy and has changed into a big force in helping the peace and progress and safeguarding the international justice since it was first established seventeen years ago.

The heads of eight Member States – China, Kazakhstan, Kyrgyzstan, Russia, Tajikistan, Uzbekistan, India, and Pakistan – as well as those of the four observer states- Afghanistan, Belarus, Iran, and Mongolia are participating in the summit.

The Iranian president is attending the 18th summit upon an invitation by his Chinese counterpart Xi Jinping.

Some senior officials, such as the Foreign Minister Mohammad-Javad Zarif, Oil Minister Bijan Zangeneh, and Minister of Economy Masoud Karbasian are accompanying President Rouhani in the meeting. On the sidelines of the summit, Rouhani will also meet the heads of some member states and international organizations.

‘Four documents will be signed by Iran and China on fighting narcotics and organized crimes, Iran’s role in ‘One Belt, One Road’ initiative, stock exchange and security cooperation, and academic cooperation,’ Ali-Asghar Khaji, Iran’s ambassador to Beijing earlier said.