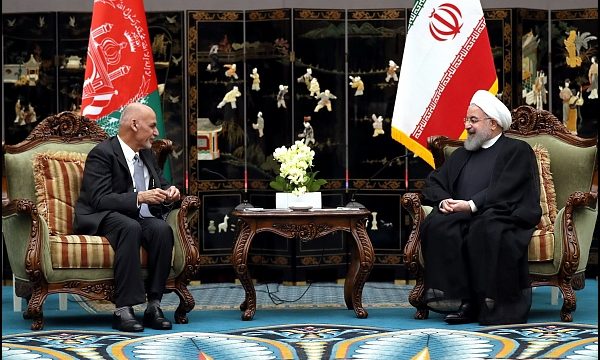 president.ir- President Rouhani described a secure and stable Afghanistan a must for regional security and development and stressed that Tehran always supports peace and stability in Afghanistan.

In the meeting with the President of Afghanistan Ashraf Ghani on Saturday in China before the SCO Summit, President Hassan Rouhani said: “The Islamic Republic of Iran is ready to help establish and sustain peace and fighting terrorism in Afghanistan and will spare no effort in this regard”.

He continued: “The Iranian nation has always stood by the Afghan nation in the past 40 years and, as two neighbouring and brother countries, we enjoy common culture, security and business interests”.

“Iran is determined to deepen relations with its neighbours, especially Afghanistan, and joint investment in different developmental projects, including transit infrastructures,” continued Rouhani.

He also welcomed further development of relations between the two countries in political, economic, security, and cultural fields, saying: “Transit and linking the countries of the region, including Central Asia to the Persian Gulf is very important, and Chabahar Port is a major step in this regard”.

On deepening economic cooperation and private sectors of the two countries, Dr Rouhani said: “Khaaf-Herat Railroad is another developmental project in this region, for the progress of which political and economic groundwork must be laid”.

He then referred to the US’ withdrawal from the Joint Comprehensive Plan of Action (JCPOA), saying: “The US’ unlawful move to withdraw from the JCPOA is not merely exiting a 7-party agreement, but violation of UNSC resolution”.

The President of the Islamic Republic of Iran also welcomed Afghan President’s wise move to announce cease-fire in the country, saying: “We hope that internal dialogue can trigger more development and stability in Afghanistan”.

“By cooperating with each other and other countries of the region, we should fight drug production and smuggling, which is a big problem for the entire region,” continued Rouhani.

He also said that the two countries’ stances in international issues are very close, adding that terrorists groups are a threat to the entire region and all countries must join hands in combatting them.