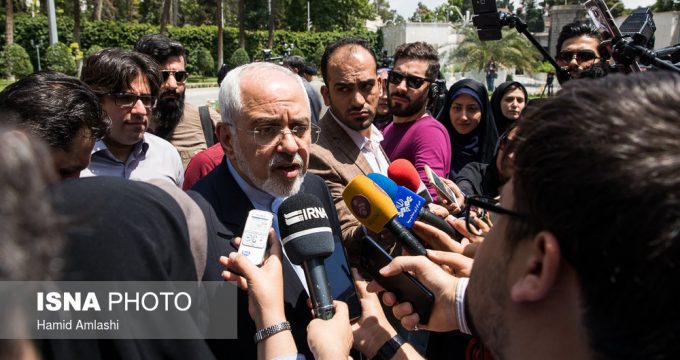 Tasnim – Iranian Foreign Minister Mohammad Javad Zarif dismissed as “a complete lie” claims that the European parties to the 2015 nuclear deal, known as the Joint Comprehensive Plan of Action (JCPOA), plan to hold talks with the Islamic Republic on its missile program.

Speaking to the Tasnim News Agency, Zarif rejected a report claiming that the European Union (EU) plans to put forward a proposal to Iran outside of the framework of the JCPOA and start talks about the Islamic Republic’s missile power and regional influence, describing it as “a complete lie.”

“The EU, itself, dismissed the report,” he said, adding that the report is part of “a psychological operation” launched by the Zionist regime of Israel to spread such lies.

“We have said times and again that we are merely negotiating about the JCPOA and have no demands or words beyond the JCPOA,” the top diplomat said.

He further pointed to recent negotiations between the Iranian and European delegations to save the JCPOA following the US withdrawal from the deal and said that it cannot be said whether the results of the talks have been good or bad.

It remains to be seen what the Europeans would suggest to Iran, the top diplomat added, referring to the guarantees that the European Union (EU) should give Iran so that the country’s interests are protected after the US withdrawal from the JCPOA.

The Europeans have pointed to all important parts of the JCPOA that should be implemented, he said, adding that now, the question is how they would implement those parts.

The remarks came after a number of Iran’s top diplomats and administration officials on Sunday attended a closed session of the parliament about the future of the JCPOA.

Earlier this month, Zarif made a tight diplomatic trip for negotiations on how to save the JCPOA in the wake of the US withdrawal from the multilateral nuclear deal.

The foreign minister held meetings with Chinese and Russian officials in Beijing and Moscow and then traveled to Brussels for talks with the European parties to the JCPOA.

He was gauging international readiness to guarantee Iran’s interests if it decides to remain in the nuclear pact a week after US President Donald Trump announced that the US was walking away from the JCPOA.

In a speech from the White House on May 8, Trump accused Iran of sponsoring terrorism and seeking nukes before announcing the US withdrawal from the 2015 agreement between Iran and the Group 5+1 (Russia, China, the US, Britain, France and Germany).

Following the controversial decision, Iranian President Hassan Rouhani said Iran weighs plans to remain in the agreement with the other five parties, provided that they ensure full benefits for Iran.

Leader of the Islamic Revolution Ayatollah Seyed Ali Khamenei has underlined that any decision to keep the deal running without the US should be conditional on “practical guarantees” from the three European parties to the JCPOA.