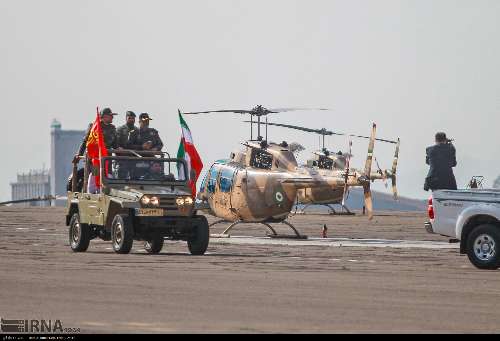 May 25 – The Iran Project – Several top Iranian military commanders have stressed the significance of enhancing the Islamic Republic’s defense capabilities.

The senior commanders including Chairman of the Chief of Staff of the Iranian Armed Forces Major General Mohammad Baqeri, Brigadier General Amir Hatami, Iranian Minister of Defense and Armed Forces Logistical Support as well as Brigadier General Ahmad Reza Pourdastan in separate remarks have announced that Iran will keep improving its defensive and military capabilities, despite of enemies’ pressure.

In a meantime, the Islamic Revolution Guards Corps (IRGC) in a statement highlighted Iran’s military power and deterrent capabilities, warning the US of the horrible fate it will face in case of attacking Iran.

“The hegemony and arrogance system, particularly heads of the criminal, warmongering, deceitful and reneging US regime have gotten the message that aggression against the Islamic Iran will make them meet a fate not different from that of executed Saddam,” the IRGC statement noted.

Meanwhile, commander Baqeri said the Armed Forces are today at the height of their defensive power as well as military and combat preparedness compared to any other time, and that they do not await any permission or [approving] smile from any foreign power to strengthen their defense power.

The Iranian military chief said the United States does not dare to confront Iran militarily, and is thus trying to subject the Iranian people to economic pressure and psychological operations.

In another development, Commander Hatami said without being affected by the West’s political propaganda, Iran won’t hesitate for a moment to boost its military and defensive capabilities.

Hatami further stated that the ‘delusional’ remarks made by the US Secretary of State Mike Pompoe against Iran are part of their unfulfilled dreams during the Iran-Iraq war.

Moreover, Brigadier General Pourdastan reiterated that Iran will never be the first side to begin a war, but if foreign threats become serious, the Iranian Armed Forces will combat them, wherever they may be.

Iran does not seek to expand its boundaries, but this does not mean that it will not strengthen its defense power, Pourdastan added.

In comments in late April, Leader of the Islamic Revolution Ayatollah Seyed Ali Khamenei said the US government is aware of the crushing response it will have to face in case of taking military action against Iran, reiterating that the time of hit and run is over.

The US is seeking a way to evade the costs of standing against Iran and place them on regional countries, Ayatollah Khamenei said, reminding certain regional countries that if they confront Iran, “they will definitely suffer blows and defeat.”