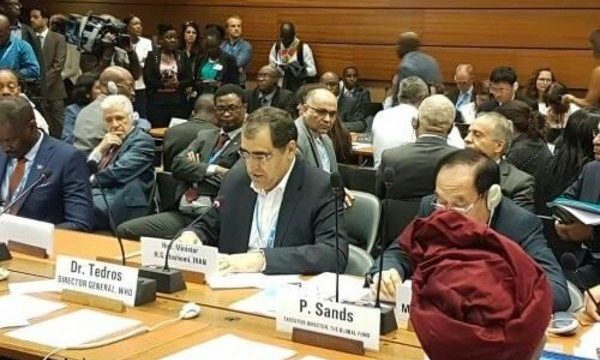 MNA – Ignoring the poor, wars, and the acts of genocide and crimes against humanity, as we are witnessing recently in the Gaza Strip by the Zionist regime’s occupying forces against the Palestinian people, can undermine collective efforts to promote public health, said Iranian Health Minister Hassan Ghazizadeh Hashemi on Tuesday.

He made the remarks at the 71st World Health Assembly in Geneva, Switzerland.

Achieving global health coverage includes protecting financial risks, accessing essential and high-quality health care services and accessing safe, effective and affordable medicines and vaccines for all, he said, adding, “this is while at least half of the world’s population still does not have access to essential health services.”

Touching on Iran’s plans to promote public health, the minister noted that ‘health reform plan’ has started 4 years ago in Iran accordingly.

Hashemi went on to say that some 11 million Iranians have been covered by health insurance based on this plan, and the share of patients from treatment costs have decreased from 54 to 39 percent.

The plan will also lead to 30 percent decrease in deaths caused by Non-Communicable Diseases (NCDs) till 2030, he further added.

According to the official website of WHO, the main functions of the World Health Assembly are to determine the policies of the Organization, supervise financial policies, and review and approve the proposed programmer budget. This year’s Health Assembly is taking place on 21–26 May 2018 in Geneva, Switzerland.

Also at the 22nd International AIDS Conference, the minister spoke about Iran’s experiences and measures regarding the prevention of this disease.

In addition to raising awareness in young people, Iran has implemented special programs to prevent the spread of the disease among vulnerable youth and especially women, he said adding that special clinics and centers have been established which provide tests and advising services.

The Islamic Republic of Iran has prepared a ‘comprehensive targeted prevention package’ which not only covers the five aims of (the United Nations Joint Program on HIV/AIDS), but also issues such as positive prevention and prevention of mother-to-child transmission (PMTCT) have been taken into account.