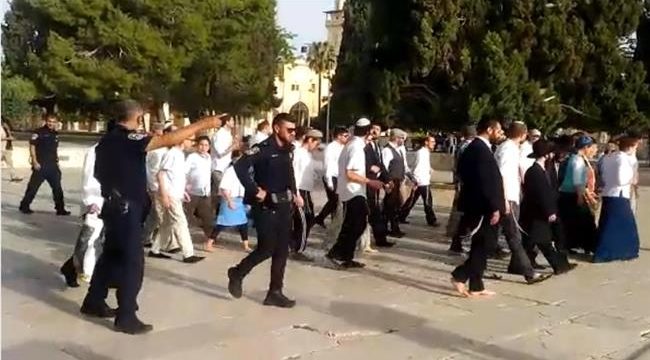 Press TV- Nearly 300 Israeli settlers have stormed the al-Aqsa Mosque compound in the Israeli-occupied Old City of East Jerusalem al-Quds amid frequent acts of violence committed by Israeli forces and settlers against the Palestinian people.

Firas al-Debs, head of the media bureau of the Islamic Endowments Department in Jerusalem al-Quds, said a total of 284 settlers forced their way into the holy site through the Bab al-Magharibah under the tight protection of several groups of Israeli soldiers and special police forces, Arabic-language Safa news agency reported.

Debs added that the settlers sought to perform acts deemed provocative by Palestinians in the mosque courtyard, but Muslim worshipers and mosque guards resisted them.

The Palestinian official went on to say that more Israeli settlers and extremists are expected to storm al-Aqsa Mosque tomorrow as they are currently commemorating the Jewish holiday of Shavuot, known as the Feast of Weeks in English.

In an attempt to avert the resolution, Trump had warned that “we’re watching,” threatening reprisals against countries that backed the measure, which had earlier faced a US veto at the UN Security Council.

Israel, however, rejected the world body’s resolution while thanking Trump for his decision to move the US embassy from Tel Aviv to Jerusalem al-Quds.

On January 18, the United States reneged on a pledge to contribute $45 million to the United Nations Relief and Works Agency for Palestine Refugees in the Near East (UNRWA), which supports more than 5 million registered Palestinian refugees and their descendants.

In a series of tweets on January 2, Trump said that the US paid “the Palestinians hundreds of millions of dollars a year” and yet gets “no appreciation or respect.”