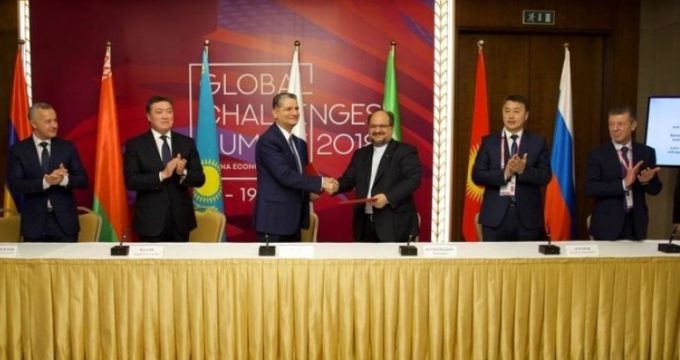 IRNA – Agreement on preferential trade between Iran and member countries of Eurasia Economic Union was signed in Astana, capital of Kazakhstan, on Saturday in presence of Minister of Industry, Mine and Trade Mohammad Shariatmadari.

In signing ceremony, Chairman of economic commission of Eurasia Tigran Sargsyan said that interim agreement signed now and in next 3 years member states should reach a comprehensive agreement and in that case for a wide range of importing goods will be reduction or elimination of customs duties.

Following final agreement, both sides will make savings in their importing customs payments.

The list included meat, some types of chocolate and cookies, cosmetics, and different types of electronic and mechanical equipment and Iran will receive tariff advantages for a wide list of food products, vegetables, fruits, dried fruits and construction materials, Sargsyan added.

He added that the rate of toll for importing goods from Iran will decrease in average for industrial goods seven percent, for member countries 3.5% and for Iranian agricultural crops 19 percent and for member- states 5 percent.

He said that Iran-Belarus relations since 1993 actively developed and increased and bilateral exchange level reached three folded in year 2017.

Member-states of Eurasia Union account for an area of 20 million square kilometers territory with a population more than 180 million.