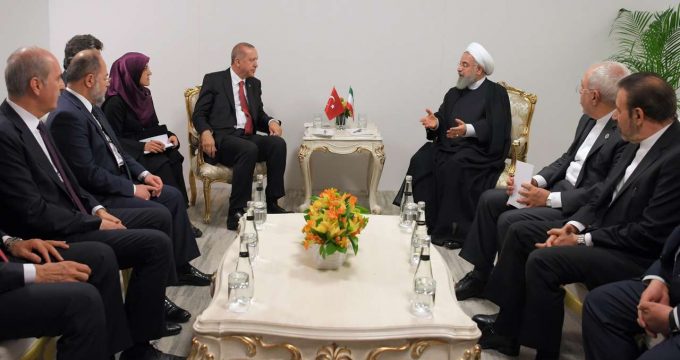 IRNA – Iranian President Hassan Rouhani said here Friday that expansion of Tehran-Ankara ties will strengthen the security and stability of the region.

In a meeting with his Turkish counterpart Recep Tayyip Erdogan, the Iranian president underlined the need for both countries to promote their cooperation in transportation and other fields of interest particularly in defending the rights of the oppressed Palestinian nation.

Rouhani, who was in Istanbul to take part in an OIC extraordinary meeting on Palestine, said that promotion of consultations and ties between Tehran and Ankara would benefit both nations.

Rouhani said the holding of the OIC summit under current sensitive conditions of the region indicated the attention of Muslim states to the issue of Palestine.

The Iranian president also referred to the US unilateral withdrawal from the 2015 Iran nuclear deal with six world powers known as the Joint Comprehensive Plan of Action (JCPOA), terming it as a blatant violation of international regulations on the part of the US administration.

Iran and Turkey have always stood, and will always stand, by each other under various conditions, Rouhani said.

Erdogan, for his part, lauded Iran’s effective participation in the OIC extraordinary meeting, and said officials of both countries have taken positive steps towards broadening mutual relations.

Describing Iran-Turkey consultations on regional issues and their efforts to strengthen security and stability in the region as ‘important’, Erdogan said many measures taken by the US administration such as its unilateral pullout from the JCPOA and relocation of embassy from Tel Aviv to Quds are not legitimate or acceptable to other countries of the world. ‘If we resist these acts we will get positive results,’ he added.

OIC emergency meeting ended late Friday by issuing a statement calling for setting up a committee to deal with the Zionists’ crimes in the occupied lands.
The statement called on major international bodies such as Security Council, UN secretary general, Human Rights Council and UN High Commissioner for Human Rights to immediately set up a committee to probe Zionists’ crimes in the occupied lands.

The statement said that illegal recognition of Quds as the capital of the occupying regime of Israel by the US is invalid, describing it an attack on the historic, national, natural and legal rights of the Palestinian nation.

Following the US provocative move in relocating its embassy from Tel Aviv to Quds tens of thousands of Palestinians protested the move that were suppressed brutally by the Israeli forces. At least 62 Palestinians were killed and some 3,000 others injured by live fire or other lethal means.

The extraordinary session of OIC on Palestine, Israeli crimes in Gaza and relocation of the US embassy relocation started on Friday with the presence of high-ranking officials from more than 40 countries in Istanbul.