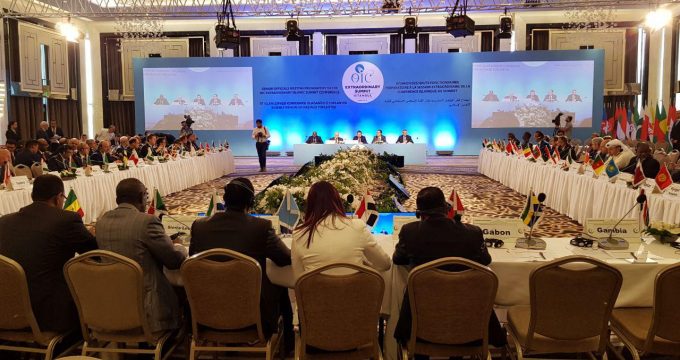 IRNA – An emergency meeting of the Organization of Islamic Cooperation (OIC) opened late Thursday in Istanbul to explore recent developments in Palestine and protest the Zionist regime’s crimes in Gaza and relocation US embassy to Holy Quds.

The two-day meeting will be held at the three senior experts, foreign ministers and leaders of the Islamic states.

Some 40 Muslim states have voiced readiness to take part in the foreign ministers meeting.

Leaders of OIC member states will convene in Istanbul on Friday evening to condemn the Zionist regime’s recent crimes and relocation of US embassy to Quds.

The Islamic Republic of Iran will participate in the event at the highest level, as President Hassan Rouhani and Foreign Minister Mohammad Javad Zarif are scheduled to take part in the event.

Turkey as the rotatory chairman of OIC has invited leaders and foreign ministers of Islamic states to attend the emergency meeting aimed at reviewing situation in the occupied lands.

#FreePalestine, al-Quds, OIC summit, Turkey, US embassy in Jerusalem May 18, 2018
8 dead, over 480 poisoned in Iran by toxic mushrooms
US more inferior than ever among Muslim countries