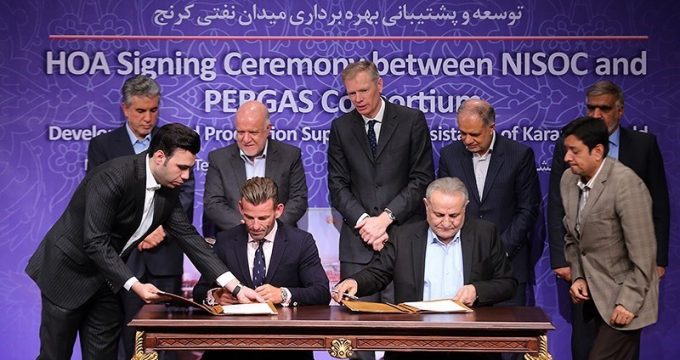 SHANA – The National Iranian South Oil Company (NISOC) and Pergas Consortium have signed a heads of agreement on Wednesday for developing Iran’s Karanj Oilfield under the newly-devised model of oil contracts.

The document was signed in Tehran in a ceremony that was held with Iranian Minister of Petroleum Bijan Zangeneh, NISOC CEO Bijan Alipour, British Ambassador to Tehran Robert Macaire, and Colin Rowley, Pergas managing director, in attendance.

Addressing the ceremony, Mr. Zangeneh underlined the difficulties of working on the project given the nature of Keranj oilfield and it being a brownfield.

“We hope that the governments of the UK and other European companies that sign a deal with Iran endorse the agreements,” he said.

Stressing that Iran could not be removed from the energy market, the official advised neighboring countries not to relish Iran’s current status; “The present circumstances will pass by and we will emerge winner.”

“We are a peace-seeking administration and nation and honor our contracts,” he added.

Zangeneh also added: “We will make every effort to maintain our production capacity and continue our exports.”

Provided that the HOA leads to signature of a contract, its implementation would bring the field’s daily crude oil production capacity to 200,000 barrels per day and a total of 655 million barrels of the item over a 10-year period.

An estimated investment of 167 million dollars directly and $187m indirectly have been envisaged for developing the brownfield.

Located 110 kilometers off southeastern Ahvaz, the southwestern province of Khuzestan, and discovered in 1962, the field is estimated to hold 11 billion barrels of in-place oil, and is currently supplying 120,000 b/d of the item.