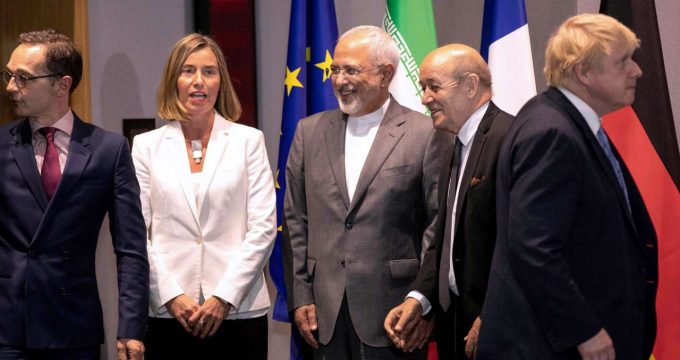 May 16, The Iran Project – Iranian Foreign Minister Mohammad Javad Zarif arrived in Brussels on Monday (May 14) to meet senior European officials on the final leg of a whirlwind diplomatic tour, which has already taken him to Beijing and Moscow.

In a meantime, prior to Zarif, Deputy Foreign Minister for Political Affairs Abbas Araqchi arrived in Brussels at the head of a high-ranking delegation to pave the way for a visit to the city by the Iranian Foreign Minister.

Araqchi also met and exchanged views the implementation of nuclear deal with Secretary of EU foreign policy Helga Schmidt and Alistair Burt, the minister of state for the Middle East at the Foreign and Commonwealth Office in Brussels.

Zarif also had an interview with Sky News correspondent. Responding to the question if European companies are threatened by the US, he said that Europe should give assurance that the US will not benefit from its unilateral move.

He also discussed over phone a range of issues with four counterparts from Italy, Bulgaria, Austria and Spain and reviewed JCPOA as well as the need for preserving it as a unique diplomatic achievement in contemporary era.

Meanwhile, Zarif and Mogherini discussed the latest developments connected with Iran nuclear deal after US unilateral withdrawal from the agreement.

Speaking to reporters after his meeting with Mogherini, Zarif underlined that Tehran continues the path to become assured that its rights will be preserved within JCPOA.

“Talks with Mogherini were very promising,” Zarif said, adding, “We discussed and examined various issues such as the need to implement the JCPOA with the remaining parties, granting a guarantee to Iran for taking advantage of JCPOA incentives.”
Talking to Reynders, Zarif stated that Tehran expects the JCPOA to protect the interests of the Iranian nation.

In the meeting, the Iranian foreign minister elaborated on the latest developments in the occupied territories and the need to prevent continued crimes by the Zionist occupiers.

Belgian foreign minister, for his part, said Brussels attaches importance to the JCPOA and regards it as a globally agreed accord and said the EU is now examining various scenarios to maintain the JCPOA in the absence of the US.

Moreover, Mogherini read out a joint statement about the future of the 2015 nuclear deal between Tehran and world powers at a press conference in Brussels on Tuesday.

She said all sides had agreed to find practical solutions over the coming weeks. Those included continuing to sell Iran’s oil and gas products, maintaining effective banking transactions and protecting European investments in Iran.

Following a meeting with his French, British and German counterparts and Mogherini, Zarif has hailed talks between Iran and the EU over salvaging the nuclear deal as a “good start.”

Also, Speaking to reporters on Wednesday, FM Zarif noted that the US measure to impose sanction on Governor of Central Bank of Iran Valiollah Seif like other measures taken by Washington is illegal.

Eventually, the top Iranian diplomat, heading a high-ranking politico-economic delegation, during his tour of China, Russia and Belgium, returned home  on Wednesday afternoon.