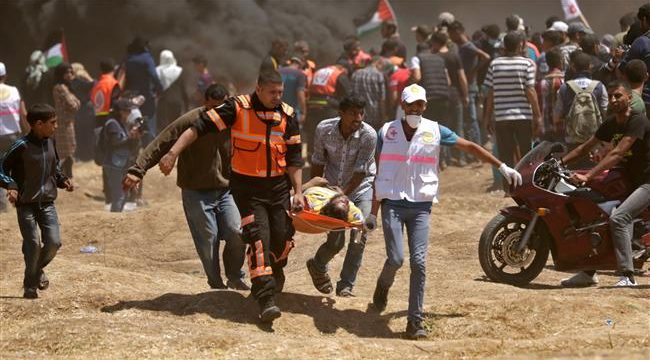 FNA – Iran’s Human Rights Headquarters in a statement condemned the massacre of the Palestinian people by the Israeli regime, and blasted the US as the main accomplice in the crime.

“Undoubtedly, the prime culprit of the Monday crime is the US administration which showed the green light to its puppet regime through the inauguration of its embassy in the holy Quds to massacre and victimize the innocent and oppressed Palestinian women and children,” the statement said on Tuesday.

The statement also lashed out at the western governments and certain regional regimes for their silence and compromise that has led to Israel’s further cruelty and impudence.

Iran’s Human Rights Headquarters deplored the barbaric crime, and called on the regional and international bodies to increase pressure on the usurper Zionist regime to stop suppression and killing of the Palestinian people and introduce the Israeli officials as war criminals to the international courts.

Tens of thousands of Palestinians launched the Great March of Return in the besieged Gaza Strip on Monday to demand their right of return to their villages and towns they were forcibly displaced.

The Gaza Health Ministry has reported that the death toll of the Palestinians martyred by Israeli fire in Gaza border clashes has risen to 63, while more than 2,700 people, including children, women and journalists, have been injured by Tel Aviv regime’s forces who are positioned along the fence.

The Monday’s rally also coincided with the moving of the US Embassy from Tel Aviv to Jerusalem, in line with the Washinton’s recognition of Jerusalem as the capital of Israel in December, furthering stoking tensions and angering Palestinians.

Al-Hussein also called for punishment of those behind killing of Palestinians saying that “those responsible for outrageous human rights violations must be held to account”.

The Amnesty International has also stressed that the attacks on Palestinian protesters by Israeli forces in the Gaza Strip on Monday are “willful killings constituting war crimes”.

The 46-day peaceful protests began on March 30, which coincided with the 42nd anniversary of the Land Day, which marks the day Israeli forces killed six Palestinians during protests against land confiscation in 1976. It continued until May 15, which marks the 70th anniversary of the Nakba, in which over 750,000 Palestinians were forcibly displaced from their homes in 1948.

Since the start of the rallies, over 110 Palestinians have been killed and at least 11,000 injured along the fence in Gaza, with no reports of Israeli casualties, according to reports.

#FreePalestine, Human Rights Headquarters, Israel, US embassy in Jerusalem May 16, 2018
Luxembourg throws its weight behind Iran nuclear deal: FM
Iran not to accede to any change in JCPOA: Velayati