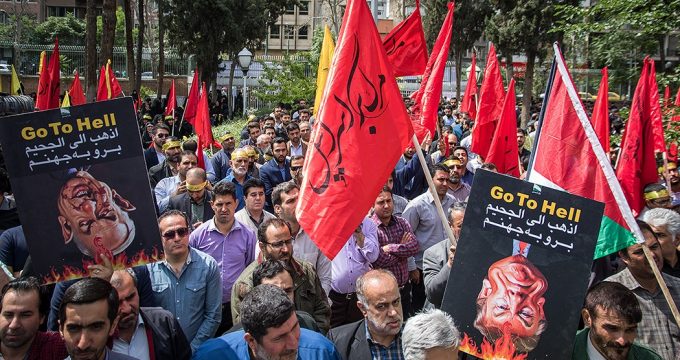 FNA- Iranian people held rallies in Tehran on Wednesday in protest at the relocation of the US Embassy from Tel Aviv to the Holy Qods.

The protesters rallied outside the former US embassy in Tehran (known as Den of Espionage) during which they condemned the brutal killing of Palestinians in Gaza Strip by the Israeli troops and the opening of US’ new embassy in Holy Qods.

The demonstrators held Palestine flags and pictures of the martyred children during recent unease in Gaza.

The protesters chanted “Down with US” and “USA, Israel shame on your deceits”.

They also held banners, accusing Saudi officials for their silence over the recent violent attacks against Palestinians.

The United States officially opened its embassy to Israel in the Holy Qods on Monday despite warnings from around the world that the measure risks triggering a fresh wave of violence in the Middle East.

At least 59 Palestinians were martyred and over 2,700 others wounded when the Zionist forces attacked a peaceful rally of the Palestinians in Gaza Strip.

Tens of thousands of Palestinians launched the Great March of Return in the besieged Gaza Strip on Monday to demand their right of return to their villages and towns they were forcibly displaced.

“These are the biggest protests we have seen on the border with Gaza so far,” Israeli Defense Forces Spokesman told Kann News.

The rally also coincided with the moving of the US Embassy from Tel Aviv to Jerusalem, in line with the Washington’s recognition of Jerusalem as the capital of Israel in December, furthering stoking tensions and angering Palestinians.

The 46-day peaceful protests began on March 30, which coincided with the 42nd anniversary of the Land Day, which marks the day Israeli forces killed six Palestinians during protests against land confiscation in 1976. It continues until May 15, which marks the 70th anniversary of the Nakba (catastrophe), in which over 750,000 Palestinians were forcibly displaced from their homes in 1948.

The United Nations top human rights official has strongly condemned Israel’s use of “excessive force” on Palestinian protesters in the Gaza Strip. UN High Commissioner for Human Rights Zeid Ra’ad al-Hussein has stressed that Israel had to stop the practice and hold to account those responsible for the many deaths and injuries.

Palestinian and foreign doctors have reported that the live fire used by Israeli troops has caused unusually severe injuries among protesters in the besieged Gaza Strip over the past month.

Multiple human rights organizations have come out in full condemnation of Israel’s violent raid on the massive unarmed civilian protests in the besieged sliver.

Human Rights Watch (HRW) slammed Israel’s killing of Palestinian protesters as “unlawful” and “calculated”, saying those officials who authorized the Israeli military to use lethal force ahead of the mass rallies in Gaza are to blame for the bloodshed.

The HRW added that footage of the Gaza demonstrations includes no evidence of protesters using firearms, questioning the Israeli claim that the number of Palestinians injured by live ammunition was likely in the dozens.

Iran protests, Israel aggression against Palestinians, US embassy in Jerusalem May 16, 2018
Merkel says Germany remains committed to Iran nuclear accord
Europe to ditch US dollar in payments for Iranian oil – source