RT– The Taliban has launched a major offensive to capture a city in western Afghanistan, with heavy fighting breaking out in the area, officials say. Local residents fear the whole province may fall to the insurgents.

Taliban militants stormed the city of Farah, the capital of Farah Province on the border with Iran on Tuesday morning, Afghan media initially reported. The fighters launched the attacks from four directions on the city, which has over 50,000 residents.

The “clashes are ongoing in several parts of the city and close to National Directorate of Security (NDS) department,” a member of the provincial council, Dadullah Qane, said, as cited by TOLOnews.

“The Taliban are moving very fast, if the government does not take serious and speedy action, the province is going to collapse to Taliban,” local resident Hamidullah said.

Another resident told TOLOnews that people were running from the city and the situation is “very bad.” 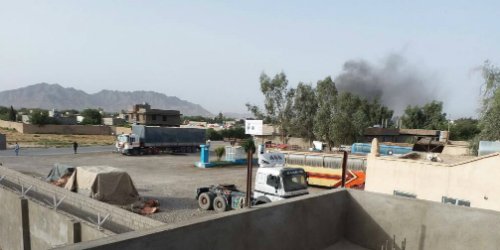 The Afghan authorities have long struggled to gain control of the isolated region, as Taliban fighters have repeatedly launched offensives on the Farah province.
Earlier in May, Taliban fighters attacked Afghan bases in the province, killing more than 40 police officers and servicemen. In a separate attack in Farah city, militants killed 11 police officers and seized a large quantity of weapons and equipment.

Clashes in Farah come amid the Taliban’s annual spring offensive, as they vow to target the “American invaders.” The group said in April that this year’s campaign, called ‘Al Khandaq,’ is in response to US President Donald Trump’s aggressive military strategy to force the militants into peace talks. A string of Taliban attacks in April and the start of May resulted in the deaths of Afghan soldiers and police officers across the country.