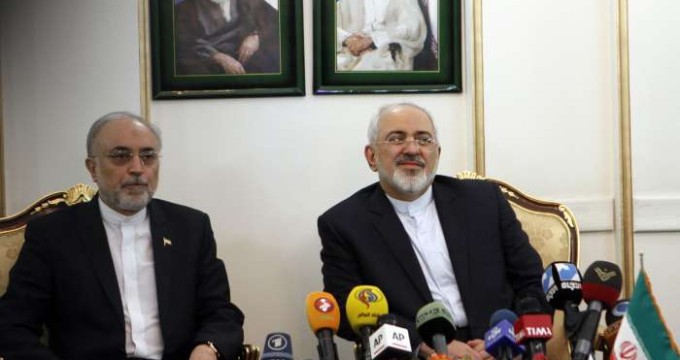 Zarif, Salehi to go to Parl. to discuss future of JCPOA

MNA– Iran’s Foreign Minister Mohammad Javad Zarif and head of Atomic Energy Organization of Iran Ali Alkbar Salehi will go to the Parliament to brief the lawmakers on the future of the nuclear deal with the world powers.

The spokesman for Iran’s Parliament National Security and Foreign Policy Commission Hossein Naghavi Hosseini said on Wednesday that Zarif and Salehi will attend the parliament session on Sunday May 13 to discuss the future of the nuclear deal known as the JCPOA as well as the future steps with the lawmakers.

Foreign Minister Zarif tweeted on Tuesday evening shortly after Trump’s announcement that the United States will leave the JCPOA, that he will “spearhead a diplomatic effort to examine whether remaining JCPOA participants can ensure its full benefits for Iran.”

In reaction to the US withdrawal from the nuclear deal with Iran, a number of Iranian MPs in the Parliament set the US flag and a copy of the deal on fire this morning, followed by chanting slogans like “Death to America!”

#IranDeal, Ali Akbar Salehi, Iran nuclear deal, Mohammad Javad Zarif, US withdrawal from JCPOA May 9, 2018
President in a phone call with French counterpart: Europe has limited time to save JCPOA
Iran vows to boost defense program despite US threats